The Demand for Perfection 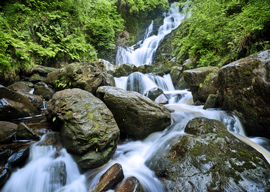 I was in New York when Lehman Brothers collapsed, in Dubai when property lost half its value in a few days, and in Dublin recently when there was a demonstration against the government. I do not conclude from this that I am the harbinger of trouble, but rather that trouble is the universal condition of mankind.

The antigovernment demonstration in Dublin was large, according to its organizers, and small, according to the government (100,000 participants against 30,000). It was peaceful enough, though no doubt there were some hotheads who, as everywhere, were spoiling for a fight: for in the midst of a fight you do not wonder anymore about the meaning or purpose of your life.

The demonstration was about an arcane Irish matter, but one that is not without universal significance”universal, that is, to modern polities. But since I am not a close follower of Irish politics, I am indebted to my friends for their account of the matter. Any errors in what follows are entirely theirs.

In Ireland, the domestic water supply has, until now, been free of charge to the consumer. The government, seeking to broaden its tax base, decided to introduce charges for the domestic water supply. It did so in a maladroit fashion, to put it mildly: first it introduced a tariff that was impossibly high; then it employed “consultants” (those shadowy figures who are to modern governments as ticks are to mammals) who charged 80 million Euros to advise the government on how to arrange the charges. “Consultancy” in Ireland, as elsewhere, is a code word for licensed theft and malversation of funds, usually with the connivance, active and passive, of the government that resorts to it. Nor is the private sector “free of this evil,” as Professor Van Helsing of Amsterdam put it when he brought an end to Dracula’s sanguinary depredations.

“But there is an important difference between water and air. Water in the abstract may be a free gift of God, but the delivery of it to homes is not.”

There was a general outcry against the government, which seemed to many to be returning to the fundamental policy of the previous government, namely that of enriching its friends. It backed down to the extent of replacing its proposed tariff with a flat rate fee of 60 euros annually per single person household and 160 euros per multiple person household. Many people found this reasonable, but the protests have continued despite the government’s concessions; hence the demonstration that I happened across in Dublin.

Ireland’s taoiseach (prime minister), Enda Kenny, has said that the protest against the water charges is not just about those charges but about much more, and everyone across the political spectrum agrees that in this, at least, he is right.

There were many different placards at the demonstration, and I suppose I ought to have guessed that St. Che would make his appearance, stenciled onto the white of the Irish tricolor flag. But the placard with the slogan that most caught my eye was:

From the river
To the sea
Irish water
Will be free.

For the demonstrators, water was a free gift of God and free access to it a human right. It seemed to them that it was as outrageous to charge for it as it would be to charge for the air we breathe.

But there is an important difference between water and air. Water in the abstract may be a free gift of God, but the delivery of it to homes is not. The latter requires a huge infrastructure and considerable expense. The demonstrators were emphatically not demonstrating for the right to forage for water wherever they found it, or to be allowed to put out buckets to collect water from the sky: they were demanding that it should be delivered nice and clean and flowing to them free of charge.

But delivery free of charge to them is not free of charge to all, for anything with a real cost must be paid for by someone. In other words, their ideal was a perfect illustration of Bastiat’s dictum that the state is the fiction by which everyone seeks to live at everyone else’s expense: that is to say, everyone who believes the state ought to be the main provider and ultimate arbiter of economic life.

Not everyone believes this. Sixty percent of Irish households have already agreed to pay the water charges and the rest still have two months to do so, which means that the minority who refuse (as the demonstrators said they would) propose to be a minority that lives at the expense of the majority. And since the government has promised that nonpayment of the water charge will never be followed by interruption of the water supply, the chances are that many will actually do so. This is not exactly the high moral ground claimed by the demonstrators.