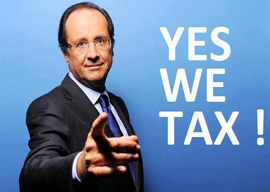 When Socialist President Francois Hollande took office, he swiftly made good on his pledge to raise the top tax rate on Frenchmen who earn a million euros a year—to 75 percent.

The regime would now confiscate three of four dollars that the most successful Frenchmen earned. Paris also imposes a wealth tax on assets worth more than $1.7 million.

This broke it for Gerard Depardieu, the famed actor and bon vivant who has performed in scores of films in such roles as Jean Valjean in “Les Miserables” and Cyrano de Bergerac.

Depardieu put his Paris mansion up for sale, crossed the border into the Belgian village of Nechin, gave up his French passport and is renouncing his French citizenship. A tiny community of French already reside in Nechin, a kilometer beyond the reach of Hollande’s tax police.

“Can a man love his country and hate its government? “

Depardieu says that this past year 85 percent of all he earned went for taxes. Over a 45-year career, he contends, almost $200 million in income has been taxed away by the French government.

The sentiment is reciprocated. One French radio station claims that 5,000 French citizens have fled since he took office.

Hollande’s regime, writes Edward Cody of The Washington Post, has all but declared Depardieu a traitor. Labor Minister Michel Sapin calls him an example of “personal degradation.” Culture Minister Aurelie Filippetti charges him with “deserting the battlefield in a war against the economic crisis.”

“When someone loves France, he should serve,” says Hollande, calling Depardieu “pathetic” and “unpatriotic.”

Which raises a question for Americans. For our revolution was born of a tax rebellion against the Stamp Act, the Townshend duties and the tea tax that led to the Boston Tea Party.

Purpose of these taxes: Have the colonies pay a fair share of the cost of the French and Indian War, in which British soldiers had driven the enemies of the colonies out of the Ohio Valley.

But when farmers in Pennsylvania rebelled against a whiskey tax to defray the cost of our Revolutionary War, President Washington marched out with 13,000 militia to crush that tax rebellion.

While the socialist left has come down hardest on Depardieu, he is well within a tradition of the cultural left.

As The Associated Press’ Thomas Addison reports, when the British top tax rate was 95 percent in the 1960s, the Beatles’ George Harrison wrote “Taxman” with the lyrics, “There’s one for you, 19 for me.”