The Despots of Democracy 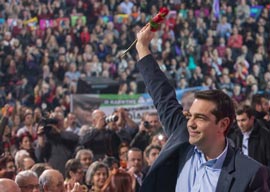 “Last night hope for real change brought the smiles back to Greek faces after five long years”: that was a fairly representative statement in the British left-wing press on the day following the Greek election. And the photos that usually accompanied such statements did indeed show numbers of Greeks full of joy at the results. Neither the statements nor the pictures were outright lies: rather they were partial truths, as are so many truths in the field of politics.

Nor was it uncommon to find the electoral victory of Syriza, led by Alexis Tsipras, described as a “sweep” to power. And in a sense, again, this was true: the party fell not far short of an absolute majority in the Greek parliament. But this was in large part because, under the Greek system, the party with the most votes gets 50 extra seats, irrespective of the actual number of votes received, presumably to obviate the deadlock that could so easily occur when a large number of political parties wins a small number of seats each. Better any government than none at all.

However, Syriza’s victory, though perfectly legitimate in the constitutional sense, was far from triumphant or overwhelming. It received only 36 percent of the votes cast, and only 64 percent of those eligible to vote did so. In other words, Syriza received an endorsement of 23 per cent of the adult Greek population. Even if the nonvoting part of the population had voted, Syriza might have received a slightly larger share, but by no means an overwhelming majority.

“Neither the statements nor the pictures were outright lies: rather they were partial truths, as are so many truths in the field of politics.”

It’s most likely that the 36 percent who did not vote were thoroughly disillusioned with the whole process and refrained from what they saw as wasting their time. The Romanian peasants had a proverb which I love to quote: “A change of rulers is the joy of fools; in other words the next lot will be as bad as the last.” And it ought to be remembered that for two hundred years or more the Romanian peasants were ruled by Phanariot Greeks. They knew a thing or two about bad government, those Romanian peasants.

Now, I do not pretend to have a solution to the problems of Greece. It seems to me that even to talk of solutions is unrealistic. It is obvious that things have not gone swimmingly in Greece in the last few years, and it is also obvious that no one emerges from the story of recent Greek economic history with credit (moral credit, I mean, not financial). The Greek government, ably assisted by Goldman Sachs, cooked its books and was allowed to join the Euro, the European leaders having been duped, or at least having allowed themselves, or pretended, to be duped; whereafter the banks felt emboldened to lend colossal sums in Greece in the full knowledge that default would not be permitted, and that they never would have lent if Greece had retained its drachma.

And what was this vast influx of money used for, apart from the inflation of the value of assets, to the great comfort of the possessors thereof? Why, to pay the salaries of a bloated bureaucracy, reliant for its good fortune on the political parties that hired it, and which it did nothing to justify, at least from an economic point of view. It was all a rather beautiful, smooth-running mechanism, in a way, a bit like that of Mr. Madoff’s splendid pyramid scheme that seemed so solid and dependable for a time. But long it could not be, as Queen Gertrude said of Ophelia floating in the brook aslant which grew a willow; and Ophelia-Greece was soon dragged down, if not to muddy death exactly, at least to muddy debt.

We know all that, I hear you cry; tell us what to do about it! There, I confess, I haven”t the faintest clue. Being a pessimist, my belief is that solutions are often worse than the problems they are the solution to. All I know is that we shouldn”t be where we are, and that the disaster was perfectly foreseeable from the start. While it is immensely gratifying to be able to say “I told you so,” it is not really of much help.