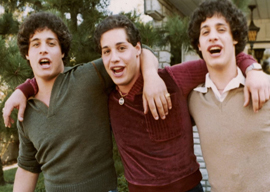 The popular new documentary Three Identical Strangers recounts the famous story of the New York triplets who were secretly separated as infants due to (spoiler alert) an arrogant Freudian experiment intended to prove the power of nurture over nature. But as 19-year-olds, they found one another during a few joyous days in 1980 when each first learned that he had two identical brothers.

The likable lads, brawny, extroverted Syracuse U. frat-boy types dressed in Saturday Night Fever fashions, became a brief media sensation as their similarities in mannerism, despite not having known of one another’s existence until a few weeks earlier, and obvious delight in each other’s company charmed talk-show audiences.

These days, we are lectured that diversity is our strength and that it is hateful to prefer to associate more with people genetically similar to us. But the documentary’s recounting of the triplets’ reunion suggests that it would be a blast to discover you have a genetically identical twin (or, in this case, two).

The triplets eventually moved into a swinging bachelor pad in Manhattan. A decade later they started a steak house called, unsurprisingly, Triplets, where the three owners led dining-room sing-alongs. But after a lucrative first year, the stresses of the restaurant business started to drive wedges between the once-inseparable trio and they were headed for different fates.

Is Three Identical Strangers, currently playing in 332 theaters across the country, an interesting and entertaining documentary?

Of course it is.

“Twins undermine not just the 20th-century orthodoxy of nurture over nature, but the 21st-century dogma of diversity.”

I’ll let you in on a movie reviewer’s secret: Virtually any documentary playing at theaters near you had to be good enough to survive the harsh Darwinian process that winnows documentaries.

Would-be documentarians start vastly more documentaries than ever get finished. And then of the many that seemed promising enough to complete, only a small fraction earn a theatrical release. And only the most engaging of those break out of New York and L.A. into national releases.

Three Identical Strangers, for example, has its own twin, The Twinning Reaction, a separate but similar documentary about the New York disco triplets that was good enough to get shown on ABC’s 20/20, but didn’t make it to theaters.

So, just about any documentary that is playing at your local megaplex is likely to be good.

Sadly, the triplets were split up for the first nineteen years of their lives by an expensive covert study sponsored by the Jewish Board of Family and Children Services, the largest not-for-profit in New York City. In 1961, the Jewish Board was hoping to prove the orthodox Freudian dogma that family dynamics outweigh genes in determining personality.

In nature-nurture debates, twins separated shortly after birth are the holy grail of research subjects. But it’s of course considered grossly unethical for researchers to split siblings, so they must look for twins who were already apart, sometimes reuniting them.

Scientists who lean toward nature over nurture are frequently denounced as nearly Nazis. So it’s interesting that the only known experimenters to actively separate twins were ardent nurturists.

According to a now-elderly research assistant interviewed in the film, the most obvious yet least expected fact that leaped out at the Jewish Board’s interviewers was that separated twins, despite their quite different family dynamics, behaved extraordinarily alike.

By 1980, fortunately, the winds were blowing against this high-handed experiment in which the adoptive parents were never even informed that their new children were not singletons.

Nor was the Freudian assumption that twins should be split up for the good of each child confirmed by less manipulative retrospective studies of reunited twins. Thomas J. Bouchard began his now-famous Minnesota twins study in 1979 and quickly learned that reunited twins generally loved being back together.

So the Jewish Board shut down the experiment around the time the triplets surfaced in the press. They locked up the data that had been collected weekly on the triplets and also on (approximately) five pairs of twins, all separated shortly after birth by the Louise Wise adoption agency, which was affiliated with the Jewish Board. (The whole affair remains so cloaked that we still don’t even know exactly how many children were used in the experiment.) No report was ever published, and the records wound up at Yale under seal until 2066.

Fortunately, a title card at the end of the film announces that, due to all the adverse publicity, the records are finally being released to the now-middle-aged subjects.

In 1980, the six adoptive parents tried to sue the deep-pocketed not-for-profit for withholding from them that their sons were triplets. It’s not explained in the movie, but I imagine the parents’ legal argument would have been not that they would have given up their sons, but that if informed, they would have made sure that the triplets got together regularly. They all lived in greater New York, so they could have spent time at one another’s houses growing up, just as they did upon reunification.

The parents contacted various lawyers, who were initially enthusiastic. But all the law firms eventually refused to take the case after discovering that none of their Jewish lawyers would ever be allowed to adopt a Jewish baby from Louise Wise.

By the way, the film’s unsympathetic, almost conspiratorial portrayal of the politically well-connected Jewish Board is a rare depiction of Jewish institutional power that doesn’t try to find some way to blame any misbehavior on the gentiles.