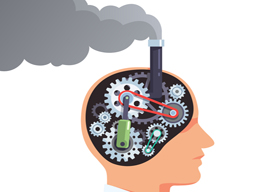 My friends on the far right see Marxists under every bed. But that’s crazy, because everyone knows that Marxists don”t hide under beds”they bang their grad students on them. Just don”t say that aloud in polite company. If you dare mention that academia has become a decadent nest of clueless leftocrats, student activists will mob your doorstep and call you a Nazi.

This constant fear transference is exhausting. It turns one of life’s greatest pleasures”the art of debate”into a quibbling marathon. To stand your ground on a controversial platform requires enormous energy. But what’s the point if you”re always expected to defend someone else’s position?

Or maybe that is the point. It saves your opponents from having to think your arguments through.

Did you inform your colleagues that white Americans are dying in the swamps of sadness? Aha! You”re a racist. Do you advocate for any border besides university admissions and velvet ropes? An avowed white nationalist. Point out that blacks commit more violent crime per capita? Might as well pull the robes out of the closet, son, because you”ve just been initiated into the Klan. Don”t have any robes? That’s okay, everyone else can see them.

“The out-group has to be a homogenous mass of pure evil. They have to be the worst people ever.”

Mass fear projection hinges on a well-established principle of group psychology: heterogeneity for the in-group, homogeneity for the out-group. It’s the mega-jock mentality observed in every team sport. “We”re all super hetero, bro! You guys are just a bunch of homos!” And those homos are bad”but bad isn”t good enough. The out-group has to be a homogenous mass of pure evil. They have to be the worst people ever.

That’s why Charles Murray and Steve King and Gavin McInnes and Steve Bannon and anyone else who breathes the same air has to be a Nazi. Who knows? Maybe you”re a Nazi too.

Do you value family heritage? Feel protective over the soil you grew up on? Don”t like foreigners coming to your country and telling you what to do?

Most people would rather hold on to their fears than admit they”re delusional. Part of it is sheer laziness. If analyzing your opponents” position doesn”t win elections or make you feel better about yourself, why bother? Why argue if you can just smear your enemies and wait for them to disappear? But there’s something deeper going on.

We saw the same psychology at work eight years ago, when the shape-shifting Obama morphed into a Communist Mussulman preparing concentration camps for gun owners. Any supporter who wasn”t black was surely brainwashed by master-race Frankenstein radio controls. My Southern neighbors were sure of it.

Whenever we see the same cognitive mechanisms operating on all sides, we”re looking at clues to human nature. Maybe these illusions are an innate part of our makeup. If so, they likely have their uses in the wild.

Let’s do what any good fascist really wants to do: pluck a self-righteous, finger-wagging, thought-policing lefty out of the crowd, yank his pussy hat off, slice his head open, and see what sort of gears are whirring inside.

We”ll poke at the sensory processing centers first. What’s this? Looks like Homo sapiens are predisposed to see snakes in the grass and faces in the clouds. According to anthropologist Stewart Guthrie, this is because our minds evolved to detect anything that remotely resembles a dangerous agent. This school of thought holds that in the ancestral environment, any brain armed with a hyperactive agency detection device“coupled with an easily triggered fear response”would survive in greater numbers than brains prone to pause and wait for their owners to think every scenario through. And so, like our primate cousins, we freak out when we see anything that resembles a serpent in the weeds or demonic faces in the forest. It may seem superstitious, but out on the savanna it’s better safe than sorry.