The Double-Born Soul of Greece 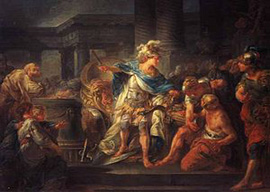 It is very still as I sit down to write, the atmosphere heavy and oppressive. They say time flies, but less so if one looks backward. Nearly a thousand years before Constantinople fell to the Ottomans in 1453, Emperor Justinian was embarrassed to discover that his Greek subjects were not paying their taxes. Cheating the authorities has become a trademark of modern Greece and is often attributed by philhellenes to the 400-year Turkish occupation and subsequent Greek resistance.

Not necessarily, says famed historian Taki. Byzantium’s government officials closely resembled modern Greek government agents. Two-thirds of the revenues extorted from the taxpayers during Byzantium’s heyday never reached the treasury. Deals were struck between collectors and taxpayers, and we know the rest. Justinian swore he would overcome the problem but never managed it.

Fifteen hundred years later history repeats itself. I write this before the Greek elections of June 17, whose results I cannot predict but venture to guess that it will decide absolutely nothing. In Greece things are never black or white. There will be a hell of a lot of rhetoric by those who have been shooting their mouths off for far too long, but that’s about it. As the French say, plus ça change! Even at the time of Pericles, the golden period of Athens, there was too much talk.

“Alexander the Great did not untie the Gordian Knot, he cut it with his sword. These clowns are trying to solve the riddle with bandages.”

Ironically, the peril to democracy back then was the power of the spoken word. At times it drove out reason. Athenians’ temperamental versatility was their greatest danger, just as it is today. Segments of the population are urged first one way then another, so any continuity is rendered impossible. The volatility of the Greek character, among many links modern Greeks have with their glorious past, is another factor. The highly individualistic Greek is too self-seeking to submit easily to others’ dictates. His unruliness makes for a bad citizen but has helped him survive centuries of oppression and to rise above adversity, economic or otherwise.

Plato saw this as a danger. In The Republic, he warned that “The excess of liberty, whether in states or individuals, seems only to pass into excess of slavery.” The great scholar Taki could not put it better. Greeks had no Renaissance, but the thread of their classical past was woven into Byzantium’s oriental web. That’s what the great Kazantzakis meant when he spoke about “the double-born soul of Greece,” the Eastern and Western side. The modern Greek fawns upon his superiors and he torments his inferiors—this is his Eastern soul. Yet he will gladly die for his personal honor—this is his Western conscience.

Pericles understood the Greek better than anyone. He realized the Greek’s passion for equality, which was greatly strengthened by the failure of Persian tyranny and the success of Athens under democracy. (In a way this was a precursor to the American obsession that all people are equal and all deserve respect.) Greeks, however, loved discussion more than execution. They adored theory and abstract themes and had an overweening tendency to subversion and insubordination. They called Aspasia—the saintly wife of Pericles—a whore, whereas real whores were treated with respect. Go figure, said Aristotle.