The Drifting Capital of Terror 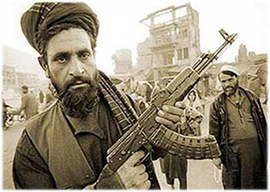 The printer cartridge bombs which nearly blew up U.S.-bound commercial jets have turned Sana”a, Yemen, into the new world terror capital. Terror, which the United States treats as if it were a state, has had many capitals and will undoubtedly have many more in this seemingly perpetual battle against evil. Right before September 11, 2001, terrorism’s capital was Kabul. Since then, it has moved like Chesterton’s rolling English drunkard along the rolling English road from south Waziristan to Kandahar to Karachi to Mogadishu to Tehran and back again.

Tripoli, Libya, was the world terror capital in the Reagan years, but it was not much of a contender. I remember those far-off days when Baalbek, Lebanon, site of Asia’s finest Roman temples, claimed the title. Of all the world terror capitals, Baalbek was probably the most agreeable. It was a little over an hour’s drive from Beirut, so journalists could drive over Mount Lebanon and through the Bekaa Valley to interview a terrorist chieftain, have a delicious lunch at the Palmyra Hotel, and be back in Beirut in time to file a story for the next day’s paper or that night’s broadcast. Over the years, Baalbek’s terrorists abounded in a variety of guises. Abu Nidal, the notorious Palestinian assassin who, depending on whom you believe, either shot himself or was inexplicably murdered in 2002 by Saddam Hussein, kept a base near Baalbek. In the nearby village of Anjar, the Armenian Secret Army for the Liberation of Armenia (ASALA) plotted its murders of Turkish diplomats. Some of the more fringe Palestinian groups, such as Ahmed Jibril’s Popular Front for the Liberation of Palestine “ General Command, kept forces close to Baalbek. After Israel’s 1982 invasion of Lebanon, the town fell to clandestine Shiite Muslim fighters who became known as Hizballah, the Party of God. Israel and France bombed the town, but Hizballah, like the Roman ruins below their encampment, survived.

“Anti-terror is the engine of growth in an economy otherwise doomed to recession.”

Before the Palestine Liberation Organization moved to Lebanon in 1971, the world terror capital was Amman, Jordan. Following Israel’s conquest of the West Bank in June 1967, Palestinian young men whose families had been exiled from their homes found themselves in Jordan believing that the Arab states” dismal failures forced them to liberate their land themselves. Calling themselves fedayeen, roughly meaning “those who sacrifice themselves,” Palestinian commandos launched hopeless raids into occupied territory. With the Jordanian Army’s help in March 1968, they held off an Israeli tank column that attacked the Karameh refugee camp. Even King Hussein, no fan of Palestinian commandos, had to say, “We are all fedayeen now.” It was not long, however, before the fedayeen hijacked airplanes, landed them in Jordan, and blew them up at Dawson’s Field. King Hussein ceased to be a fida’i and, during Black September 1970, he began expelling the commandos from his country. The world terror capital then moved to Beirut. (The best book on the twisted relations between the Palestine Liberation Organization and the Jordanian throne remains John Cooley’s Green March, Black September.)