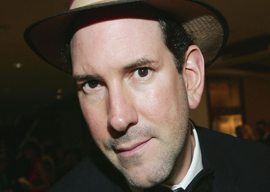 “I just report the news.”

That phrase may not have the currency of “The check’s in the mail,” but it’s all too familiar as every journalist’s favorite alibi. They always trot it out after printing photos of one man’s last seconds alive or after swarming churchgoers at memorials to slaughtered children. (Although I doubt they’d have pulled this stunt at a mosque.)

One media maven who can actually make that claim with a straight face is Matt Drudge.

On paper, the Drudge Report has no business being as popular and lucrative as it is. The website is as ugly today as it was when it launched in 1997. Sometimes it posts insider tips, such as the Monica Lewinsky story that made the site a household name. Mostly though, Matt Drudge and two staffers simply scan wire services and “real” newspapers, cook up irresistible headlines, then post links back to those same articles.

In other words, he intentionally sends his readers to other news websites in droves. Drudge has been called a parasite, except parasites tend to drain their hosts, not help keep them alive.

“Getting your story linked at The Drudge Report,” one journalist noted, “is more important to a reporter’s reputation nowadays than getting a Pulitzer Prize.”

One estimate places the Drudge Report’s value at between $150 million and $375 million. That’s while traditional newspapers report ad-revenue losses for the past 25 quarters.

“Drudge has been called a parasite, except parasites tend to drain their hosts, not help keep them alive.”

Other ironies abound. Anecdotal received wisdom has it that most North American reporters use the Drudge Report as their default browser home page and check it multiple times a day, even if many deny it.

Matt Drudge’s critics dismiss his site as a knee-jerk right-wing bullhorn, which makes little sense since: A) he’s been accused of burying stories critical of Obama; and B) as previously explained, Drudge lifts most of his “news” from liberal papers anyhow.

Bizarre left-wing attempts to “out” Matt Drudge as “gay” and therefore discredit him (?!) have fallen flat again and again.

Which brings us to the latest charge against Drudge. You’ll never guess: He’s a racist.

Budowsky scolds Drudge for “the sheer number of race-related and often race-baiting stories that you regularly banner on the Drudge Report.”

Others have noticed Drudge’s predilection for posting multiple tales of black “flash mobs,” especially on annual events such as Memorial Day and Black Friday.

The obvious weakness with these self-righteous complaints about Drudge’s editorial judgment is that he doesn’t invent these stories of mayhem, most of which (again) he lifts from liberal newspapers. And these reports happen to reflect the depressing fact that “blacks, who represent about 12 percent of the population, commit about 40 percent of the crime.”

Then last week, lefties could barely contain their delight when Drudge posted a large photo of director Quentin Tarantino along with the following “headline” in the site’s famous bulging ultra-bold type:

You see, Tarantino’s new movie, Django Unchained, is a period piece about a former slave on a vengeful murder spree. Its star, Jamie Foxx, had just hosted Saturday Night Live and boasted about killing “all the white people in the movie,” adding, “How great is that?”

So Drudge lifted a story from the Hollywood Reporter, which reported that Django Unchained “features no fewer than 109 instances to the ‘N word.'”