The Dumbing-Down of America 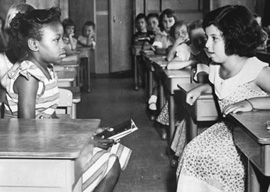 “Is our children learning?” as George W. Bush so famously asked. Well, no, they is not learning, especially the history of their country, the school subject at which America’s young perform at their worst.

On history tests given to 31,000 pupils by the National Assessment of Education Progress, the “Nation’s Report Card,” most fourth-graders could not identify a picture of Abraham Lincoln or a reason why he was important.

Most eighth-graders could not identify an advantage American forces had in the Revolutionary War. Twelfth-graders did not know why America entered World War II or that China was North Korea’s ally in the Korean War.

Only 20 percent of fourth-graders attained even a “proficient” score in the test. By eighth grade, only 17 percent were judged proficient. By 12th grade, 12 percent. Only a tiny fraction was graded “advanced,” indicating a superior knowledge of American history.

Given an excerpt from the Supreme Court’s 1954 decision Brown v. Board of Education—“We conclude that in the field of pubic education, separate but equal has no place, separate education facilities are inherently unequal”—and asked what social problem the court was seeking to correct, 2 percent of high school seniors answered “segregation.”

“The boot about to trample the Statue of Liberty had a huge swastika on the sole.”

As these were multiple-choice questions, notes Diane Ravitch, the education historian, the answer “was right in front of them.”

A poster put out by the Committee to Defend America by Aiding the Allies, circa 1940, was shown and the question asked, “The poster above seeks to protect America and aid Britain in the struggle against …” Four countries were listed as possible answers.

A majority did not identify Germany, though the poster contained a clue. The boot about to trample the Statue of Liberty had a huge swastika on the sole.

“History textbooks,” added McCullough, “are “badly written.” Many texts have been made “so politically correct as to be comic. Very minor characters that are currently fashionable are given considerable space, whereas people of major consequence”—such as inventor Thomas Edison—“are given very little space or none at all.”

Trendies and minorities have their sensibilities massaged in the new history, which is, says McCullough, “often taught in categories—women’s history, African American history, environmental history—so that many students have no sense of chronology … no idea of what followed what.”