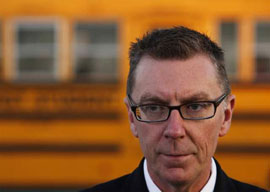 During the Vietnam War, a famous protest bumper sticker read:

It will be a great day when our schools get all the money they need and the Air Force has to hold a bake sale to buy a bomber.

But these days, spending on quick fixes for education is approaching levels similar to the military-industrial complex. For example, Los Angeles school superintendent John Deasy plans to pay Apple a billion dollars to furnish every student with an iPad and software (some of which hasn’t gone through the formality of existing yet).

While the Air Force’s notoriously expensive B-2 Stealth Bomber program cost $45 billion from 1979 to 2004, the LAUSD iPad rollout, if scaled up to the entire country, would total about $75 billion.

A billion here, a billion there, pretty soon we ought to be talking about real management. Unfortunately, the education industry approaches aerospace-sized projects with more starry-eyed optimism than is prudent for a bake sale, much less a war.

In an age when Silicon Valley trumpets “disruptive technologies,” it’s hardly surprising that the education reform establishment is addicted to the concept of magic bullets that will finally Fix the Schools. Who doesn’t love the allure of a revolutionary technological, doctrinal, or organizational fix for all that ails us?

To get some perspective on what it takes for a radical innovation to actually work in the real world, I recently reread Ben Rich’s Skunk Works, the tale of Lockheed’s invention of the revolutionary F-117 Stealth Fighter, which was really a small bomber invisible to Soviet air defenses.

“The education industry approaches aerospace-sized projects with more starry-eyed optimism than is prudent for a bake sale, much less a war.”

Flight-tested at Nevada’s Area 51, the radar-deflecting Nighthawk was so alien in aspect that it looked like it had been designed by those UFO pilots the government keeps locked up there. (Just kidding. [I think.])

In the 1991 Gulf War, the F-117 led the blinding of Iraq’s Soviet and French-made air defense system, flying approximately 1,300 missions without suffering a bullet hole.

And yet the tale of how stealth technology helped win the Cold War turns out to be much more complicated than just Lockheed building a plane that bounced away radar beams. The full story contains a lesson for school reformers. The key turned out to be not just having a warplane with what seemed like a comic-book heroine’s superpower”a cloak of invisibility”but the most boring phrase imaginable: system integration. It’s a concept almost completely unknown in the excitable world of education reform.

Skunk Works is perhaps the best of the as-told-to autobiographies by Cold War military-industrial figures such as Colin Powell, Norman Schwarzkopf, and Chuck Yeager. It didn’t sell as well as those bestsellers in part because its subject, the boss of Lockheed’s advanced projects division from 1975-1990, was a civilian pencil pusher. Who wants to read the memoirs of Dilbert’s boss? Moreover, Rich couldn’t do a prolonged book tour because he was dying of cancer when Skunk Works came out in 1994.

Still, ghostwriter Leo Janos, who had earlier scored with Yeager: An Autobiography, did a remarkable job of making a life spent sitting behind a desk or standing on a runway enthralling. Skunk Works remains a model for how to construct a nonfiction book for maximum readability.

Since the Battle of Britain in 1940, radar had been the keystone of air defense. From the 1950s into the 1970s, Lockheed’s Skunk Works designed three planes that each embodied one of the three main tactics against radar-controlled surface-to-air missiles: height, speed, and, ultimately, stealth.

Skunk Works’ founder, legendary aircraft designer Kelly Johnson, built the U-2 spy plane in the mid-1950s to fly too high (70,000 feet) for existing Soviet missiles. It provided President Eisenhower with crucial information on what the Reds were up to and, perhaps more importantly, what they weren’t: They weren’t massing to launch WWIII.

After the Russians finally shot down CIA pilot Francis Gary Powers’s U-2 in 1960, Skunk Works delivered the imposing SR-71 in the 1960s to fly too fast (well over 2,000MPH). The SR-71 Blackbird was the most awesome airplane ever to enter service. Besides, the US had”as far as I know”never risked it overflying Russian airspace for fear of interceptor SAMs, which could be tipped with small nuclear bombs.

Still, the Blackbird so galvanized the male imagination that Congress forced the Air Force to reactivate it in the 1990s, even though it was extravagantly expensive to operate and no role besides reconnaissance had ever been worked out for it.

Ben Rich didn’t invent Stealth. Shortly after he had taken over Skunk Works from Johnson in 1975, an employee named Denys Overholser brought him an old article in a Soviet scientific journal extending James Clerk Maxwell’s electromagnetic equations. Overholser proposed turning Petr Ufimtsev’s equations into software that could predict how large any shape would appear on the radar screen. With this tool, they could design a plane that would be undetectable at night: at last, a magic bullet!

The emerging high-tech threat to Soviet air defenses in the early 1980s inspired the Soviet air force to back the energetic young reformer Mikhail Gorbachev to shake up the stultified system. Instead, Gorbachev’s perestroika and glasnost brought down the Soviet empire.