The Elephant on the Tube 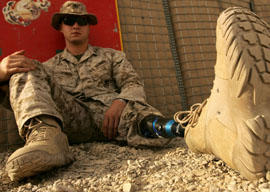 He saw people stare, but he looked right through them. His mind was on something satisfying. A distant thought made him smile. The bands on his right wrist read “Parachute Regiment” and “Walking With The Wounded.” His T-shirt had a whisky sponsor’s name on it and his left arm wasn”t there. I could see the stump covered in a white sock reflected on the opposite window.

A well-dressed man got on at London Bridge and solemnly bowed his head upon seeing him. A drunken girl stared at him in between muttering into her handbag looking for something. I sat a couple of seats from the soldier; the man in between us looked straight ahead without flinching as if he was a guardsman outside the Palace. It was as if nobody knew what to say or where to look. The injured soldier on the Jubilee Line had become today’s elephant in the room. What do you say?

I could feel the tension and wanted to break it. People looked away but the soldier was still sitting there. He wasn”t going away and he didn”t need me to ease the tension. You could tell by his manner he was happy to handle the stares, comfortable in the line of fire. The passenger between us got off at Bermondsey, clearing the space. I moved across, asking a question that betrayed I was a former soldier: “You still in, mate?”

“I could never find an ounce of self-pity in any of the amputees. These boys and girls were taught never to feel sorry for themselves.”

He smiled and said “Yep” in a soft South African accent.

We had a chat about each other’s service and he told me he”d been in for five years as a paratrooper. He”d lost that arm in Afghanistan after a grenade had been fired at him. The people around us no doubt felt sorry for him, and so did I. He was twenty-five years old but none of his manner asked me to feel sorry. He stood straight and spoke straight. Ever the soldier. He knew what the job was and he”d sworn the Oath of Allegiance on the Bible like the rest of us. I did mine on a Koran.

When friends of mine were killed in Iraq and Afghanistan, they were sent home in boxes. We made our peace with that after losing the first soldier. We knew it might happen to us. Our parents watched the news every night and shuddered at every knock on the door. Most soldiers don”t die. They come back in one piece and some even feel guilty for having survived without a scratch. It’s this middle ground that worries so many”getting injured, losing something. A leg, an arm, both.