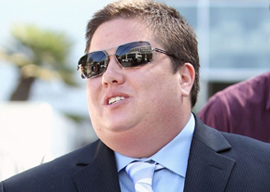 Although she recently opted to surgically guillotine her bazooms, the stubbly tattooed blobfish born Chastity Sun Bono has no penis and has yet to fill and pave over her vagina with cement, so I refuse to refer to that mortally confused woman as “he.” There ain’t no wiener in that there sausage factory, and thus anyone who insists “Chaz Bono is a man” or “He was born that way” is either a liar, an idiot, or a lying idiot. Baby Bono has no boner, and she could mainline enough testosterone to where she looks like Haystacks Calhoun, but she will forever remain a chick—a hideously mutant sac of celebrity DNA gone wrong, sure—but still a chick.

I have no clue if it’s because her parents forced her to cross-dress at an early age or whether Sonny Bono had a weird habit of calling his daughter “Fred.” I know not whether it’s because, straight out of the womb, she lacked the star power and nearly perfect navel of her mother Cher. What seems certain is that at some point she fell under the delusion that she was former Van Halen bass player Michael Anthony trapped inside the body of a talentless, Oxycontin-addled female college dropout. The fact that she continues to act on this delusion is not evidence of a brave man making a bold journey of self-actualization; it’s proof of a frightened, disturbed woman desperately fleeing from herself.

“The left—whatever’s left of it—has a queer tendency to mistake ideas for reality and reality for ideas. “

That didn’t stop the freak-fellating mainstream media from rushing to “his” defense when it was announced last Monday that the adipose monstrosity who legally changed her name to Chaz Salvatore Bono would be a contestant on the new season of Dancing With the Stars, assuming the male role alongside the certifiably female hoofer Lacey Schwimmer. A reviewer said that Chaz’s decision to flaunt her flabby armpits on the program “shows guts.” Truth is, Chaz Bono shows guts wherever she appears. A girdle has yet to be fashioned that can begin to conceal her guts.

After a predictable backlash from uptight moms and a conservative psychiatrist with a hilariously double-entendre surname, Chaz waddled to her own defense and belched to ABC News that “America really needs to see this.” Sorry, John Candy, Jr., but this is the last thing America needs to see. Her publicist Howard Bragman said that “The sky will not fall when Chaz Bono dances.” No, but the floor might cave in. One can only hope that the physically inactive activist’s uterus will fall out during an especially vigorous foxtrot.

Since Chaz is now a “man,” Chaz is no longer a lesbian, and her longtime oyster-gobbling partner Jennifer Elia has suddenly ceased to be a dyke and is now a heterosexual woman, and anyone who does not accept this charade at face value is automatically a confused bigot.

To enter the world of the “transgendered” is to dip one’s unsuspecting toes into a rancid bowl of alphabet soup filled with “autogynephiles” and “genderqueers” and “F2Ms” and “M2Fs.” It is to watch the “pangendered” engage in rhetorical turf wars with the “gender fluid” while the “gender dysphoric” sit in the corner and cry. It is to observe the “pre-ops” seethe with jealousy toward the “post-ops” while “apotemnophiles” try to bum cigarettes from “drag kings.” Most enjoyably, it is to watch third-wave feminists mud-wrestling with second-wavers over whether men ever have a right to become women.