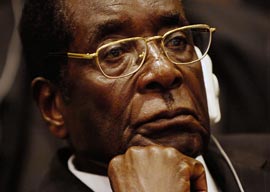 Robert Mugabe, sempiternal president of Zimbabwe, was recently booed and jeered in parliament, suggesting that, after more than a third of a century in power and at the age of 91, he still has a thing or two to learn about being an absolute dictator. Of course, he might also be a believer in the hydraulic theory of human relations, according to which it is better to let people blow off a little emotional steam than wait for them to really explode in anger and (in this case) try seriously to overthrow him. It is, after all, more difficult to plot in earnest against a man whom you have just jeered.

It is also difficult not to admire Robert Mugabe in a way. He is remarkable for his age, and to accuse him of having ruined his country (it is claimed that a sixth of the population will go hungry if emergency assistance is not soon provided) is somehow beside the point. I used to think when I was living in Tanzania that Julius Nyerere was incompetent, having maintained his country quite unnecessarily in the direst poverty (to the hosannas of most development economists, especially Scandinavian), until I remembered that he had remained in power for 25 years. No politician who remains in power for that long can be called incompetent, at least not if you accept the Machiavellian view that the end of politics is power. In that sense, then, Robert Mugabe is supremely competent.

“I do suspect most of us would rather be misruled by our own people (however we define our own people) than well governed by strangers.”

He is certainly a natty dresser, much smarter in appearance than any prominent Western politician. If you consider the Zimbabwean climate, you know what sacrifices he must have made to appear so immaculate on all occasions, what iron self-discipline it took and continues to take to do so, even if it is all at the expense of others. Most Westerners can”t be bothered anymore to dress even for a funeral, even in the most clement weather.

Now, some might say that the matter of President Mugabe’s mode of dress is unimportant, of interest only to the frivolous, but I hold with Polonius that the apparel oft proclaims the man. What, then, does Mugabe’s dress proclaim? What confusion of sentiments? Where one man wields so much power, such questions are important.

As everyone knows, Mr. Mugabe devoted the first part of his life, and his considerable talents and intelligence, to overthrowing the white settler regime of Southern Rhodesia. This was done in the name of freedom, but as we can now see (and has more usually been the case, in fact), it was done really in the pursuit of power. Only, if it is better”irrespective of all other considerations“to be ruled by people closely resembling the bulk of the population than to be ruled by a small minority alien to the rest of the population, can it really be said that Mr. Mugabe’s regime is better than the one it overthrew? In fact, I do suspect most of us would rather be misruled by our own people (however we define our own people) than well governed by strangers: a truth, if it is one, that has uncomfortable consequences for political philosophy.

Be that as it may, Mr. Mugabe’s attitude to the settler regime was not one of total rejection. There were many things about it that he admired. And in truth it was a remarkable regime, one with a very small elite who produced and ran a functioning, though not of course a just, state. It was not only the efficiency but the style that Mr. Mugabe admired, and since outward show is easier to imitate than inner substance, Mr. Mugabe adopted that style as his own, and the dress of what he thought was the British gentleman. The uniformed men around him still wear the uniforms of the British hierarchy.

If my surmise is correct, Mr. Mugabe longed”though he would never admit it, perhaps not even to himself”to be accepted into the colonial elite, as he felt his education and ability entitled him to be. In my opinion, the greatest harm inflicted by colonial regimes, certainly in their later phases, was to the pride of the colonized. It was not the larger injustices that moved them (it seldom is), but the disdain and contempt in which they were so obviously held by the colonizers. Unrequited admiration is bad enough, but to admire those who regard you as beneath consideration, and as congenitally stupid and lacking in capacity, is painful indeed.