The End of Adventure 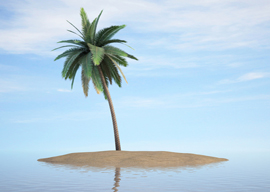 Judith Schalansky. Pocket Atlas of Remote Islands”Fifty Islands I Have Not Visited and Never Will. London, New York: Penguin, 2012. 240 pp.

The West is writing over all the world’s white spaces. The unrolling triumph of occidental enlightenment and exploration has meant the near-complete charting of the planet”conquest of the tallest peaks, penetration into the remotest forests, sounding of the deepest submarine trenches, and attainment of the abstract Poles. We have stripped shadows from the world and bathed it in harshly antiseptic light. As we have driven back the frontiers of geography we have driven into extinction the many-headed monsters that once patrolled the edges of all atlases. Although there will never be an End of History, sometimes it feels as though we”ve come to the End of Adventure.

How ironic that such an anticlimax should be the outcome of the greatest adventure of all”those eager centuries when the little countries at the westernmost end of the Eurasian “world-island” sent out their best and bravest to find new trade routes, to spread the fame of their country and deity, and to seek knowledge and excitement. The resounding language of the King James Bible expresses something of the mixed motivations and restless romance of the great explorations:

They that go down to the sea in ships, that do business in great waters;

These see the works of the LORD, and his wonders in the deep.

The caravels, carracks, galleons, galleys, pinnacles, sloops, and whalers of the Europeans crept down perilous coasts and breached brooding horizons, often to die in the doing”bringing catastrophe (and civilization) to native nabobs, ancient insular cultures, and overly specialized ecosystems.

“No man can be an island, but we project onto them our deepest desires.”

A desire to bring magic back to maps motivates Judith Schalansky”a German graphic designer who cannily combined her cartographic and typographic interests to produce a beautiful atlas-as-literature. “Now that it is possible to travel right round the globe,” she observes, “the real challenge lies in staying at home and discovering the world from there.”

Her Pocket Atlas, translated almost faultlessly into English this year, brings together depictions of some of the world’s loneliest rocks with whimsical or appalling tales from the islands” past or present. It projects readers across thousands of miles of ocean until we are alongside the author, bobbing off some black-cliff behemoth in the banshee-winded south, or floating apparently on air in a white-sand-coconut-palm fringed lagoon while giant manta rays wing below.

Islands are paradoxical places where even evolution bends its rules to make tortoises that can carry men and pigeons that once bulged grotesquely into doomed dodos. They are places we approach in unlimited hope, where convicts can become kings. No man can be an island, but we project onto them our deepest desires. As Schalansky notes:

The island seems to be in its element, still in its natural state, unchanged since the beginning, paradise before the fall from grace, innocent and unblushing….A land surrounded by water is perceived as the perfect place for utopian experiments and paradise upon earth.

I think of Stevenson’s Tahiti or Margaret Mead’s Samoa”or a thoughtful young girl growing up in East Berlin, flicking longingly through the People’s Democratic Atlas and ignoring the socially significant statistics in favor of tiny yellow blobs floating in fathomless reaches of azure. The Pocket Atlas is awash with accounts of incurable romantics and seekers after spiritual peace or fabulous treasures.

But islands can also be pointless places where convicts simply stay convicts, such as the notorious Norfolk Island penal colony north of New Zealand.