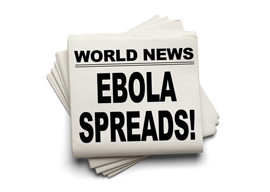 On August 2, 2014, the Obama Administration allowed the first of two American health care workers who had contracted the Ebola virus back into the U.S. There is no logical reason to have done this; in fact its illogic is so great as regards possible spread of the epidemic that this act borders on madness.

For those who question the degree of alarm this return of infected parties to native soil engenders, of the 1,440 people so far afflicted, over 100 have been medical professionals. In total 887 (and rising daily) have perished. Or in layman’s terms, even those with the most experience and best protective equipment, and who have taken every precaution to avoid exposure, have succumbed. This, for a pathogen with a 50% mortality rate on the low end and 90% on the high. There is no vaccine and there is no cure.

The current outbreak of Ebola in Africa has largely been overshadowed by more dramatic news of lesser global impact: the disappearance of Malaysia Flight 370 over the Pacific, the downing of Malaysia Flight 17 in Ukraine, and renewed fighting in the Israeli-occupied territories. Most casual observers neglected to note even at the height of CNN’s nonstop Flight 370 coverage that Ebola’s death toll was steadily catching up.

“There is no logical reason to have done this; in fact its illogic is so great as regards possible spread of the epidemic that this act borders on madness.”

Previously the largest Ebola outbreak was in Uganda during 2000, accounting for 425 total cases and 225 casualties. Thus the present crisis has hit three times as many people as the most numerous incident on record. Moreover, past emergencies were almost universally confined to a single nation and frequently but one region or village. The calamity of today includes the capital city of Guinea as well as Sierra Leone, Nigeria, and Liberia. Hence it is already international.

As for resources on the scene, they include the World Health Organization, which has strongly hinted that the virus is out of control. The U.S. Centers for Disease Control have numerous personnel attending. Meanwhile, Liberia has closed its borders in an effort to contain the matter. ASKY Airlines has likewise suspended flights to Sierra Leone, as has Arik Air Nigeria. Dubai’s Emirates also cancelled all air travel to Guinea.

Yet authorities in the United States permitted highly contagious incubators to return to a mainland which has until this time never had an Ebola casualty. Although Sanjay Gupta of CNN challenged this decision to Dr. Thomas Frieden of the CDC, within days the interviewer had been reduced to carrying water when he appeared with former CIA intern Anderson Cooper to reassure viewers they had nothing to worry over.

Worse, when Toby Cosgrove, president of the Cleveland Clinic, appeared on NBC’s Meet the Press he repeated the inane trope: “We”ve gone to a globalized world … with transportation this is something we must learn to deal with.” Yes, Doctor, the pertinent point being your ilk are the ones transporting it! The fact that murder occurs every day is no excuse to help Jeffrey Dahmer buy a knife using your credit card.

Far from exaggeration, there is cause for concern from people who have recently traversed the zone. Derbyshire MP Pauline Latham has soundly criticized the UK government for permitting her and others to travel in the area and disputed the minimization of risk versus the gravity on the ground. She characterizes the Home Office diffidence as “foolish.”

This recklessness is especially troubling given that highly-trained individuals have continued transmitting the infection amongst themselves. While U.S. facilities may be marginally better than those in question on the Dark Continent, one should not envision Emory University contrasted with Albert Schweitzer in a mud hut. The disease was being treated in the better facilities of Africa which, though far fewer in number, are roughly commensurate with those of the West.

Therefore this relocation cannot be accounted for as medical necessity. Indeed, the bizarre series of choices starkly contradict historically proven methods of quarantine in cases of hemorrhagic fevers. The natural ensuing question is then, “Why?” As to that I am unwilling to venture a diagnosis.

It could very well be this is but one more exemplar of the addled thought processes prevalent in contemporary man. One should never discount abject stupidity as the modus operandi for anything, especially in politics. Given that Obama managed to single-handedly crash Wall Street last week with an announcement of wholly ineffective “sanctions” on Russia, this may be more evidence of exactly the level of intelligence with which we are dealing.