The Epic Failure of Tantrum Politics 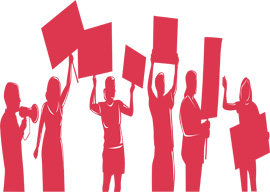 Fast food and public protests typically hold as much appeal for me as rectal cancer, yet last week I simultaneously exposed myself to fast food and a public protest with a pair of visits to the local Chick-fil-A franchise.

I popped in last Wednesday at around 9PM to find the restaurant still overflowing with customers like muffin-top fat rolls over tight polyester trousers because it was Chick-fil-A Appreciation Day. Many of the patrons were obese, red-cheeked, flat-topped, checker-shirted, effusively wholesome Southern peckerwoods, which is atypical for the neighborhood and suggests a smidgen of Astroturfing from the pro-Christian, anti-gay-marriage crowd.

On Friday at around 9AM I wolfed down a spicy chicken biscuit while anticipating pink hordes of French-kissing homosexuals. They”d threatened to stage a gay “National Same-Sex Kiss Day“ counterprotest to Appreciation Day, which was itself a counterprotest of an initially threatened mass national boycott of the fast-food chain due to its CEO’s soul-scaldingly hateful comments supporting the radical extremist notion of “traditional marriage.” But during my tenure there Friday morning, there were no gay couples outside kissing and the restaurant was relatively empty.

By most accounts, Chick-fil-A Appreciation Day was a rousing success. The company claims it racked up record sales. By contrast, the gay kiss-in was generally deemed a flop.

Even more encouraging, a loathsomely self-satisfied super-douche who harassed a longsuffering Chick-fil-A drive-thru worker and posted the results on YouTube found his feeble attempt at shaming drowned in a vicious backlash that cost him his job.

I invest zero emotion in the ongoing gay-marriage brouhaha. I question why the state claims the power to authorize any kind of marriage, as well as why an issue that directly affects”at MOST”one or two percent of the population has such enduring “legs” in the news cycle year after year.

But I find comfort in the fact that what William Safire described as the “nattering nabobs of negativity” were ruthlessly smacked down last week by what Richard Nixon called the “silent majority,” a term he ironically seems to have lifted from JFK.

Maybe the sun is finally setting on the Era of Tantrum Politics. Maybe it won”t be so easy anymore to body-slam individuals and businesses to the mat and force them to tap out lest they be shamed and shouted and glitter-bombed and boycotted and extorted and guilt-tripped over the possibility that some hyper-sensitive professional loafer will have their fragile, glass-orchid feelings hurt.

At least that’s how things seem to be trending.

The squeaky wheels started squealing for less oil in the wake of 2010’s Deepwater Horizon Oil Spill, as Hollywood’s pelicanophiles and the rock world’s shrimp-lovers called for a boycott of British Petroleum. In typical displays of leftist compassion and kindness, BP workers were routinely harassed as the co-stalkers of Big Oil and Western Civilization sought to slay the corporate oil giant whose neglect had torn apart many waterfowl and crustacean families in the Gulf Coast.

The end result two years later? Shares of BP’s stock are currently selling for 43% more than they were during the frenzied sell-off directly after the oil spill.