The Eternal Appeal of Whodunits 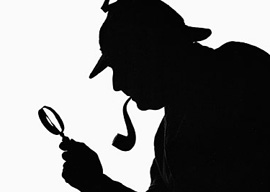 In most of its manifestations, the detective story is a modern morality tale with the heroes of good battling the forces of evil. The detective story is the conservative literary genre par excellence, which is why it has appealed for decades to readers across the world.

The genre’s critics say its conservatism is tied to an outdated, class-ridden structure as well as a reluctance to embrace modern ideas or left-wing points of view (loosely referred to as “social justice”).

Consider what happens in a detective story, even a modern one that purports to have a leftward (or “enlightened”) leaning: A crime, probably murder, is committed, possibly followed by similar crimes. The world is turned upside-down as a result. Together with the detective, we cannot rest until the perpetrators are discovered and brought to justice. The perpetrator is at the very least prevented from repeating the crime. Human life is sacrosanct. Murder is wrong, no matter how you look at it. It is the ultimate crime. It destroys nature’s balance, which can be restored only by the culprit’s discovery and his or her punishment. In a century that saw the casual elimination of millions of people, this highly moral attitude became and remained attractive to many people. This has continued into the new century, which has not started off too well.

“The detective story is the conservative literary genre par excellence, which is why it has appealed for decades to readers across the world.”

Dame Agatha Christie knew there is evil in all of us that we must control but sometimes cannot. Modern detective stories and thrillers try to ignore this by somehow assuming that nobody with the right—or, rather, left-wing—point of view can be a criminal and if they are, it is somebody else’s fault. These are aberrations. In the genre as a whole, anybody can be a killer for any conceivable reason, just as anybody can lie, cheat, or steal. What prevents most of us from doing so is our ethical understanding and the social structures that have been built on that.

There have been stories of Nazi concentration-camp inmates performing Christie’s plays. Her books were read whenever possible in communist countries. It is not only the attractive, orderly, cozy world she describes that appeals to many—it’s the assumption of human fallibility. When you read her books carefully you realize the world is not all that cozy and violence can intrude at any time. Anyone can be a criminal, she says, but no criminal must be permitted to get away with it. This underpins all detective stories, which even in their more violent modern versions remain the most moral of all genres.

The Sherlock Holmes stories have followers in every part of the world and were avidly read in the Soviet Union. They spread an admirably fascinating message in a society that denied there is a definite right and wrong: Crime is not to be tolerated, order is an accepted form of life that must be restored when it is broken, and the police are not all-powerful but subject to the same rules as the rest of us.

P. D. James, considered by some to be the modern Queen of Crime, once caused a stir for emphasizing the detective story’s moral and conservative underpinnings. The media twisted her words to mean that she did not think any interesting crime could happen on a council estate and that the latter’s denizens did not have enough moral understanding to be of any value to a detective-story writer. She said that for crime and detection to be interesting, there had to be a moral understanding first. Where this happened did not matter, but mindless violence did not interest her. It had to be an orderly society broken up for her to investigate the crime and its consequences.

The millions of detective-story readers understand this. They may want a good page-turner or they may want to see a wrongdoer punished. But mostly they want to lose themselves in a modern morality tale, which is conservative by definition.