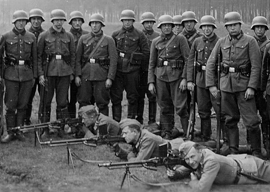 Political correctness has permeated the historian’s craft to such a degree that honest historians must reinvent the wheel. PC has infected German history in particular. The doctrine of German “collective guilt” is often held as a precondition for German good behavior. Established historians in the US, England, and especially Germany must assume their subjects’ general wickedness since at least the 1871 unification. The German Republic’s leading social theorist, Jürgen Habermas, has argued repeatedly that viewing Germans as less than responsible for all of modern European history’s major catastrophes is “pedagogically dangerous.”

Habermas seems unconcerned with what the father of modern technical history, Leopold von Ranke, gave as the historian’s true function: describing the past “as it actually occurred.” He is quite happy that Germans learn half-truths and even total fabrications, provided these make them aware of their sinfulness and therefore willing to atone. Such self-loathing will also make Germans eager to give up their tainted national identity and become members of a world community (whether or not one really exists). Certain untruths have an apparently salutary character, and all the major German political parties now accept Germany’s sole responsibility for both World Wars and the positive role of Stalin’s armies in “liberating” their country from “fascism.”

Basic to this self-flagellation is having Auschwitz serve, in a former German foreign minister’s words, as the “founding myth for the German Federal Republic.” One must believe that not only did the Third Reich murder millions of Jews, but that Germans of all classes and regions happily cooperated. The most extreme form of this accusation is found in Daniel Jonah Goldhagen’s Hitler’s Willing Executioners (1996), released in Germany as Hitlers Willige Vollstrecker. The book was a German best-seller despite its insubstantial or invented evidence, a fraud methodically dissected by Jewish critics Norman Finkelstein and Ruth Bettina Birn in A Nation on Trial: The Goldhagen Thesis and Historical Truth (1998). Still, Goldhagen conducted book tours among the descendants of those he indiscriminately trashed, bringing mass displays of smarmily repentant German sinners.

“One must believe that not only did the Third Reich murder millions of Jews, but that Germans of all classes and regions happily cooperated.”

Not all books about what Germans supposedly knew about the Holocaust and what they did to assist it are as tacky as Goldhagen’s work. The more respectable formulation of his thesis goes like this: The Nazi extermination of the Jews was an “open secret.” No German administrator or military officer was supposed to know “state secrets” unless they pertained to his assigned function. While any violation of this restriction would be met with severe punishment, the secret was not as well kept as Germans would have their conquerors believe. Jews could not have been removed, we are told, without their non-Jewish neighbors knowing they would suffer a horrendous fate wherever they were taken.

The now received view preaches that there was anti-Semitism in Germany going back many centuries. It notes that in the interwar period, nationalist parties urging the exclusion of Jewish citizens received many votes. There is something else that anti-German historians now emphasize but which they may exaggerate: the occasional breakdown of the distinction between the Waffen SS Einsatzgruppen—which rounded up and murdered Jews, Poles, and Russians—and Wehrmacht soldiers who were simply fighting a war.

Just about every Anglophone historian writing on the Third Reich is now arguing that the Holocaust was mostly the work of regular German soldiers. The complaint of “Holocaust minimizers”—that the numbers of prisoners killed in death camps has been inflated—now seems acceptable. But historians such as Tim Snyder and Richard J. Evans have turned the argument around: It wasn’t necessary to transport Jews to death camps to kill them because so many soldiers were rushing to do the dirty work. They depict the Holocaust as a public-works project, fueled by sympathy for Hitler’s “Final Solution.”