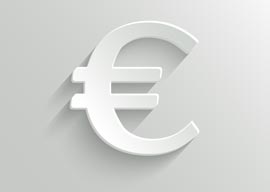 And lo, the Lord did smite the followers of Baal and do unpleasant things to the worshippers of false idols and crass ideas. And face it, few belief systems come more stupid than the Euro. Yet God has a sense of humor”even if the Germans and their finance minister famously do not”and has again contrived to delay the day of judgment. A compromise here, a further bailout extension there, and the wounded currency lurches on to the next crisis and cliffhanger.

Embracing the basket economies of southern Europe into the Eurozone was ever akin to allowing a cripple into the Pamplona bull run: much sweat and a lot of screams, ricocheting off innumerable obstacles, and someone eventually gets trampled. However many spectators applaud and will a different outcome, the result is unlikely to vary. So it is that the Euro”a political construct rooted in fantasy and conceit”will one day lie in the dust and gasp its last. Its death throes will be piteous.

Trouble is, socialists are hard-wired to tax and spend. Deny them their raison d”Ãªtre and they implode. What you see in the latest Eurozone showdown is the consequence of left-wing instinct colliding with reality: the Greeks have no wish to pay their taxes, the Germans no desire to spend their money on the Greeks, and Greek socialists in particular hate austerity and financial discipline. VoilÃ , as the once pro-European French would say.

“Maybe I shall learn to knit: I will need something to while away the hours as the tumbrils ferry the Eurocrats of Brussels on their way to the scaffold.”

Against all the odds”and evidence”Eurozone leaders believe their sacred project is unstoppable. Yet they cannot square a circle. To accommodate the Greeks is to sanction sloth and recklessly undermine the credibility of the currency; to eject them and see them bankrupt is to recognize the strategic flaws of the Euro and admit its existence might be finite. What a bind. Unsurprisingly, the politicians are squabbling.

What they are at pains to avoid is the deeper truth: you can have either democracy or the Euro, but you cannot have both. To make the currency union work, there must be a single central bank and a single centralized government. Try it and you will find not merely protests on the city streets of Europe, but populations in open and armed revolt. Impose an artificial structure, deny people their national identity or control over their destinies, and there will be blood.

As surely as the constituent parts of the former Yugoslavia divided and threw off the dead hand of Belgrade, so individual states will turn against the faceless nonentities of Brussels. Even those born collaborationists the French are growing weary of the European dream.

All I ask for is a ringside seat when the inevitable collapse arrives, when the unaccountable technocrats are finally forced to account. They have never understood there are voters out there, that not everyone buys into their scheme”that their utopian objectives for the homogenization of the continent and free shuffling about of its people have drained nations of their character and created burgeoning resentment.

Maybe I shall learn to knit: I will need something to while away the hours as the tumbrils ferry the Eurocrats of Brussels”the arrogant and corrupt, the failed and freeloading politicians, the gravy-train riders”on their way to the scaffold. It would be nice to hear the faint strains of Beethoven’s “Ode to Joy” above the jeers, to witness the charred remains of EU banners still smoldering from their flagstaffs. Now that’s what I call a European project.

Occupation is occupation, however it is defined”as cooperation, integration, union, or Anschluss”and whether it arrives with marching bands and Wehrmacht uniforms or unelected fat cats purring by in their Maybachs and Mercs. No one was ever asked. Today, up to 50 percent of British laws derive from Brussels, and commentators wonder why the electorate feels disenfranchised and disgruntled with  participatory politics. People do not vote if they cannot make a difference.