The Evil of Occupation 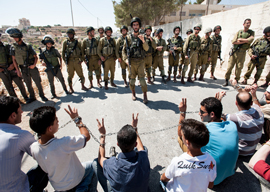 Ask any Greek about the Turks and the best you”ll get is a grimace. More often than not the answer will be a swear word and the word “barbarians” thrown in for good measure. Ditto the Congolese when the word “Belgium” comes up, not to mention the Algerians when discussing la belle France. The Indians do not play this game. They always considered themselves superior to the British, who more or less lorded it over them for a hundred years or so, but the Brits did do many good things in India, and took many good things back in return.

And then, of course, we have our very own American Indians, known the world over as noble savages who talked a straight game with good people like John Wayne, but were more often than not betrayed and forced into reservation slavery by unscrupulous men like Andrew Jackson. Well, not all Indians. I had a great love once when I was on the better side of twenty. She was the mistress of Hoagy Carmichael, the great pianist and Hollywood star, and I remember her name was Rita Cahill, and she was 100 percent American Indian. She was the sexiest and most beautiful woman ever, and if she’s still alive she must be over ninety. My other favorite Indian was Billy Mills, a Marine, who won the 10,000 meters in the Tokyo Olympics of 1964 and then allegedly described himself to the press as 100 percent Indian and 110 percent Marine.

“Israel today is ruled by extreme right religious parties that see Palestinians as subhuman, a situation that encourages the use of disproportionate violence against civilians as we saw in Gaza the last three weeks.”

Some of you may have guessed by now as to what I”m driving at: occupation and conquest are not like the movies, and there’s never a happy ending. In fact, occupation rots the soul of both occupier and occupied. When the Zionist dream of a Jewish homeland began in earnest with the Balfour Declaration, they used to say there were about 5,000 Jews living in Palestine, or so I recall. This figure keeps growing as the Israelis rewrite history, but the number soon grew in reality as Rothschild millions bought out poor Palestinian farmers and helped European Jews immigrate. In 1947 a Jewish homeland was voted into existence through UN Resolution 181, calling for two states in the Holy Land, one Jewish and one Arab. That’s when the Stern Gang and Irgun went into action, driving about 700,000 Palestinians off their land and turning them into Israel proper. Arab armies came to their aid but were defeated by the Israelis. In 1967, the 1948 borders were eradicated when Israel grabbed the rest of the West Bank and West Jerusalem. It’s been a brutal occupation ever since.

American arms and alms continue to support Israel, and Uncle Sam repeatedly vetoes UN resolutions calling for Israel to give back the occupied territories. The occupied population chose to oppose the occupier, and as a result any type of resistance has been labeled as terrorist inspired. The resister is now a terrorist, no ifs or buts about it, and woe to any American politician who dares contest this. In fact, the resistance has been demonized to such an extent that there is now no moral middle ground between resistance and terror. Worse, the Israeli left is all but extinct because its pro-Palestinian members are labeled as soft on terror. Israel today is ruled by extreme right religious parties that see Palestinians as subhuman, a situation that encourages the use of disproportionate violence against civilians as we saw in Gaza the last three weeks.

Knesset members last week called for the Israeli army to destroy the homes of the terrorist snakes and to murder their mothers as well. And a professor at Bar-Ilan University, one Mordechai Kedar, suggested that raping the mothers and sisters of terrorists might deter further terrorism. In the meantime the international community sits on its hands, washing them rather, refusing to bring Israel and its leaders to account and charge them with crimes against humanity.

The overall Israeli plan is to eventually cleanse the West Bank of all Palestinian resisters and push them into Jordan, using the Jordan River as a natural border. What is missing from this plan is western outrage, as when Milosevic tried it after the breakup of Yugoslavia. And if any of you are hoping to see Netanyahu and his band appear in the Court of Human Rights as defendants, I”ve got news for you. It will never happen. Jews the world over will not allow it, nor will the newspapers and television stations that they own go along. Israel was once upon a time known as the country that made the desert bloom. It has now lost its soul, turned into a greedy dragon swallowing up Arab villages and killing Arab women and children. It’s as sad an ending as the plight of the captive Palestinians.