The Evolution of Bad Tennis 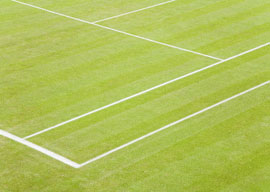 A first-round loser at Wimbledon this year will receive $35,000 for showing up even if he defaults before the first ball is struck. Back in 1957 I got close to 200 dollars for losing in the singles qualifying draw and getting into the draws for the men’s doubles and mixed. Call it inflation if you”d like, but today’s pros outside the top 100 need the moolah more than we did back then. I traveled with two Cubans (the Garrido brothers) and two Chileans (Pato Rodriguez and Potoko Aguirre). We lived in a cheap hotel near Earls Court and paid one pound per week for a room without bath. On the Sunday before the championships started, I met a beautiful actress, Liza Gastoni, who lived in Deanery Mews next to the Dorchester Hotel. When she saw the shithole I was living in, she invited me to stay and I moved in for the duration. My fellow tennis players were envious as well as furious. (Jealous, actually.) When I brought her to Wimbledon, my doubles partner, Wayne Van Vorhees, fell madly in love with her and threatened to pull out of the competition unless I stopped being possessive. All I can say 56 years later is that he played his heart out in the doubles.

Tennis was a wonderful sport when it was shamateur. Tournaments paid for one’s travel and provided hospitality. A few shekels under the table did the rest. We were all friends. No one had a coach back then. We practiced, drank, and traveled together. The top players such as Roy Emerson, Nicola Pietrangeli, and Manuel Santana hung out with the lowliest on the circuit such as yours truly. The middling players hung out with their own kind, just like in society I guess. My big buddy was Ken Fletcher, an Aussie who won the Wimbledon doubles many times but lost every penny he ever made on the green tables. We”d finish hitting balls, shower, and rush to the London casinos, namely Aspinall’s where I was a member. Our losses got so bad Ken had to sell his Chinese girlfriend, Pammy, to a Chinaman who had lotsa moolah. “You didn”t have to go that far,” I told him when I found him crying in his room.

But enough nostalgia. Let’s talk about the present state of the game. Matches take much too long and that is because the trainers, strategists, gurus, and psychologists who today make up the stars” entourage decided some time ago that their providers should take their time between points to gather their thoughts and emotions and thus concentrate better. It has now deteriorated to the following: Towel off between every point, when once upon a time we toweled off only while changing court at odd games. Hand back the towel and then ask for three or four balls. Examine each ball and give back one or two to the ball boy. Then stare at the opponent Ã  la Sharapova, not unlike King Xerxes looking at the Attica plain before the drubbing he took from us Greeks at Salamis. Then, once ready, tap the ball with the racket and bounce the ball with the hand”sometimes up to eleven or thirteen times. Then, after missing the first serve, the whole rigmarole starts all over.