The Eyesores That Unite Us 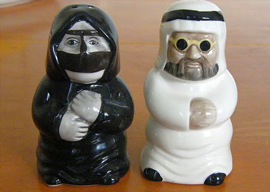 Some years ago, in a flash of inspiration while in Istanbul, I had an idea of a kind that occurs to me infrequently: I thought of an entirely new institution, the National Museum of Kitsch. I would collect particularly egregious examples of kitsch and display them in a gallery, thereby performing, in my own imagined estimate, a public service of some magnitude. By showing what was bad, I should point people in the direction of the good.

Throughout my life, unfortunately, I have never been able to follow up on my imagined projects. They are like dreams; I forget them shortly afterward. There is another obstacle to my project: I could collect examples of kitsch all right because kitsch tends to be cheap, and I could even call for donations from a public wishing to rid itself of its hideous ornaments”but I am not rich enough to buy or construct the large building necessary to display them (the collection, I fear, would soon grow to enormous size, indeed become untenably large).

The object that inspired my idea was an alarm clock in the form of a pink plastic mosque with gold-colored decorations on sale for three Euros on a street-stand. Its alarm was in the form of a muezzin’s call, and if it went on for long enough, if the sleeper failed to wake and to turn it off, the verses that the muezzin recited changed and his tone grew more urgent. I thought I detected a note of moral disapproval entering his call.

“I suppose you can say that a country with a manufacturing sector has reached maturity in the economic sense when it subcontracts the manufacture of its kitsch to another country.”

There were four colors of mosques to choose from: apple green, baby blue, lemon yellow, and shocking pink. It was the latter that I chose because it was the worst, if judgments of good and bad could be said to apply to this particular genre of object. A real collector, I suppose, would have bought all four.

The mosque alarm clocks were made in China. I suppose you can say that a country with a manufacturing sector has reached maturity in the economic sense when it subcontracts the manufacture of its kitsch to another country.

I have collected a few items in a desultory way ever since; for example, salt and pepper pots in the shape of an Arabian man and woman in traditional headgear”they, too, were made in China”but nothing like enough even to constitute the nucleus of a museum. The other day, being back in Turkey, I bought one of those holograph pictures that change with the angle from which you look at them. It presented three AtatÃ¼rks, the central one as a handsome young man, the one on the left middle-aged, and the third on the right in old age, sufficiently realistic to make one suspect that by that stage he liked a drink more than a little. Up on my wall now, the eyes of AtatÃ¼rk follow me everywhere in the room. I paid between six and seven Euros (without bargaining) for this privilege.

I don”t want to give the impression that Turkey is a land especially prone to kitsch. Far from it: it is, if anything, slightly below average in this respect. Kitsch, in fact, is the most widely distributed artistic phenomenon in the world. A taste for it unites humanity; I suppose in these communitarian days we should even speak of the kitsch community, the many tens of millions who decorate their walls and their bodies with it (tattoos are archetypically kitsch), those who manufacture and sell it.

Neither is kitsch confined to the religious or political spheres of life, though those spheres are peculiarly liable to its expression. When I remember all the plaster and plastic busts of dictators, saints, and gods that I could have bought on my travels, but failed to do so, I am sick at heart. Even worse, I did not buy the once easily-available cloths, imprinted with portraits of dictators, which the ululating and swaying steatopygic African dancing women used to wear when greeting the leader of the day. My personal favorites were the cloths bearing the likeness of His Excellency the Life President Ngwazi Dr. H. Kamuzu Banda, of Malawi. They were common and valueless at the time, but I did not have the wit to realize that one day they would be rare and of great historical interest to students of kitsch.

What exactly is kitsch? If you ask people of discrimination that question, they generally reply with a variant of Doctor Johnson’s dictum that it is easier to say what poetry is not than to say what it is. In the case of kitsch, people of discrimination say that they recognize it easily enough when they see it but cannot recite its defining characteristics. The fact that discriminating people have such a definitional difficulty, however, does not worry me or suggest to me that the phenomenon does not really exist. Words are always to our experience what butterfly nets are to a cloud; they are the best we have to convey experience, but always leave an unbridgeable gap between themselves and experience itself. Most of us would be hard put to define a tulip, but we know one when we see one, so that the word tulip suffices for most intents and purposes and leads to no doubts about the existence of tulips either individually or collectively.