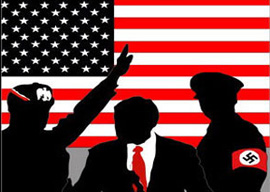 Although the adjective “fascist,” as George Orwell pointed out during and right after World War II, was a slur applied to “those we don”t like,” the indiscriminate use of the “F” word seems more common now than it was in 1945.

Political correctness drives this revival, although the association of fascism with absolute evil was already common by the late 1960s. That’s when the new “F” word became the ultimate insult in New Left grunting (replacing the other “F” word, which was elevated to the socially chic). Then along came the Holocaust industry to equate fascism with Nazism and Auschwitz.

Fascism was a time- and space-related movement which arose in Europe between the two World Wars and which was heavily shaped by World War I’s effects. Fascism resulted from the mobilization of mass armies, the creation of command economies, and the problem of reintegrating veterans into war-torn societies. Fascists were also reacting against the revolutionary left, particularly anarchists and communists. Communists in Germany, Finland, Austria, and Hungary were then being supplied by the newly created Soviet Union. The paramilitary formations that opposed the left stressed national identity”and in the Austrian and Spanish cases, Catholic corporate structures”as opposed to communist internationalism and socialist atheism.

“Fascism has a definite historical meaning. It is not an expletive to describe everything that someone dislikes.”

Contrary to an idea popular among American libertarians, fascists were not really leftists and once in power were not particularly socialistic. In fascist Italy, they supported some welfare-state measures, particularly after the Depression, and what they introduced, such as subsidies to industries and farmers, paralleled the New Deal in the US.

Fascism belonged to the right but was not conservative in any traditional sense. It took over the revolutionary rhetoric of the leftist internationalists and socialists, but fascist “national revolutions” changed the social structure only minimally. In Latin countries and in Austria, the fascists borrowed heavily from the Catholic Church and took over at least the labeling of neo-medieval corporate and guild organizations.

Not all fascist movements were racist or anti-Semitic. Latin fascism was neither one nor the other in its substance. Jews were disproportionately represented in Italy’s National Fascist Party until Mussolini, recklessly and perhaps in imitation of his newly gained German allies, threw Jewish fascists out of the party and out of Italian professional life in 1938.

Until 1936 Mussolini was Europe’s major opponent of the expansion of Nazi power. Churchill was shocked at how suddenly he changed sides during the Italian invasion of Ethiopia in 1936. Nazism and those satellite governments Hitler created during his conquests were not garden-variety fascists. The Nazis borrowed heavily from Stalinist totalitarianism, while Hitler’s satellite leaders came from all over the political spectrum and were mostly opportunists. Nazi puppets, as in the French case, often came from the left. Such Nazi collaborators as Anton Adriaan Mussert in Holland and Vidkun Quisling in Norway had headed nationalist parties which had recruited Jewish members before the German occupation.