The Failure of Profiling Racists 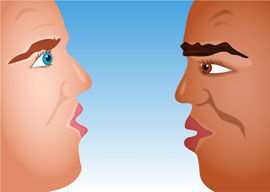 What can we learn from the media and government frenzy to railroad George Zimmerman, a campaign that continues even after his acquittal, with the Obama Administration now threatening hate-crime charges?

First, the KKKrazy Glue that holds together the disparate elements of the Obama Coalition is fear and loathing of white racists, even when they aren”t racist. Or white.

Second, the farcical trial was”or at least would have been in some rational alternative universe”a huge black eye for the reliability of the prestige press on race-related topics. The evidence presented to the Zimmerman jurors was so out of sync with the storyline packaged for the public in 2012 that there should be a National Media Day of Shame and Self-Criticism.

The press mania got the Sanford, FL police chief, Bill Lee, fired for not charging Zimmerman. But local law enforcement was right all along. The bulk of the evidence always supported Zimmerman’s story of self-defense; thus the quick, decisive verdict.

The only reason Zimmerman was put on trial for murder was because, in their lust to find a white racist murderer of an innocent black baby who got away by flashing his White Privilege Card, the media didn”t bother checking a photo of Zimmerman before inflating this exurban police blotter item into the Defining Event of Our Times.

If George Zimmerman had gone through life as George Mesa (his mother’s maiden name), or (in the Latin style) George Zimmerman Mesa, this story would have just been another depressing black v. brown fight. Thus it would never have made it out of the Orlando metro area.

For example, a few years ago my wife and I got ourselves involved as busybody amateur sleuths in the shooting by a federal agent of a teenage violist. Exactly 168 hours after the killing we went to the crime scene and ran into the bewildered mother looking for clues as well. We told her the cops” story sounded fishy and encouraged her to consider a lawsuit. This case is fairly comparable to the Trayvon Martin case, except that the cops did the shooting, and there was apparently no exploitable racial angle. Thus you”ve never heard of it. Why not? Because tragic stuff happens every day in a huge country like this.

In conclusion, if the elite media got so very wrong a not inherently complicated street-crime story such as Martin-Zimmerman, how likely are they to misinterpret intellectually challenging questions such as the current immigration bill’s effects?

Third, the example of George Zimmerman”a white, black, and Amerindian son of a Peruvian immigrant, what Latin Americans call a pardo“shows once again that, no matter what the Census Bureau’s demographic categories say and no matter how many sermons we hear about how immigration and interracial marriage are propelling us toward a post-racial utopia, in the 21st-century American media mythos there are really only four kinds of people:

Thus Zimmerman, despite being about as miscellaneous as it gets, became the epitome of the Bad White Man for the press. The great bulk of public discourse consists of whites arguing with each other over who are the Good White People and who are the Bad White People. Blacks such as Trayvon and Barack are valuable props in this white struggle over status.

But mostly, nobody much cares about the miscellaneous. Sure, their vast numbers mean they matter for marketing and vote-counting. But they don”t have much of a place in the media imagination, which prefers to keep things simple: black and white, good and bad.

The miscellaneous get mentioned mostly in meta-allusions. For example, support for massive immigration today is frequently a coded form of white filial piety and ethnic pride in Ellis Island roots.