The Fairy Skeleton of the Chilean Desert 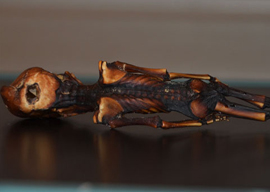 Amid the din of social, political, and terroristic unrest that takes up so much of the major media’s (and the Internet’s) time, there occasionally surfaces a story of cosmic importance. Earlier this year, one Dr. Steven Greer unleashed a documentary called Sirius. In it, the good doctor alleges that the US government is aware of and covering up the activities of extraterrestrials on this planet and is manipulating technology to keep the Earth’s population in bondage and out of touch with our space brothers. Thus far, his assertions are standard UFOlogy fare familiar to those of us who lighten long nighttime drives by listening to Coast to Coast AM. What makes this doc unique is that it introduces us to what Dr. Greer and his friends consider irrefutable proof of alien life: a six-inch skeletal humanoid found in a Chilean desert ghost town.

Employing a reputable scientist to examine the imp’s DNA, Greer hoped that the tyke would turn out to be an ET”the first physician to examine it thought it was a fetus. But according to the scientist”one Garry Nolan, a professor of microbiology and immunology at Stanford’s School of Medicine”the little fellow is definitely human, with a Chilean Indian mother. But the debunking ends there, for the thing is horribly deformed, with a huge head and ten (rather than the standard 12) ribs. Far from being a fetus, Nolan says he believes the wee chap bit the dust at six to eight years old.

“I’d rather be ruled by Oberon than Obama.”

This almost inevitably led to claims of people having reported sightings of tiny men in the Atacama Desert down through the years”though this could merely be Internet-driven gossip. But this leads me to another hypothesis regarding the remains, one that does not require the presence of space aliens. What if the thing is a mummified fairy?

Many who believe in UFOs may complain that their theories are based upon hard fact suppressed or misinterpreted by the government, whereas belief in fairies is just silly superstition. Well, maybe”and maybe not.

It could be argued that most believers in fairies today are either ignorant bumpkins dwelling in backwaters such as Iceland, the Celtic fringe, Corsica, and Maramures, or else devotees of Theosophy or the New Age. Memories of Sir Arthur Conan Doyle’s spirited defense of the Cottingley Fairies can bring a smile to the lips even now. More modern voices, such as the Findhorn farmers who claim to raise bumper crops through fairy cooperation, do not necessarily inspire confidence. Rosemary Ellen Guiley, who has made a name for herself exploring every aspect of the paranormal, has recently begun to treat fairies (whom she now refers to by the Arabic name of djinn) as conspirators on their own. Her account makes them sound like some of the more malevolent aliens described by UFOlogists”a resemblance reinforced by her assertion that alien abductions may be laid at their door.

Regardless of how crazed these notions may seem, fairy mythology or its equivalent is ubiquitous in cultures around the globe. It is not just the work of enthusiasts such as Janet Bord that give us something to ponder. Even serious scholars such as Katharine Briggs and Pierre Dubois, after lifetimes of studying the relevant folklore and literature, admitted they were at least halfway persuaded that fairies exist.