The Fed Trashes the Dollar 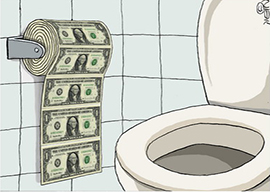 If it is the first responsibility of the Federal Reserve to protect the dollars that Americans earn and save, is it not dereliction of duty for the Fed to pursue a policy to bleed value from those dollars? For that is what Chairman Ben Bernanke is up to with his QE2, or “quantitative easing.”

Translation: The Fed is committed to buy $600 billion in bonds from banks and pay for them by printing money that will then be deposited in those banks. The more dollars that flood into the economy, the less every one of them is worth.

He is reducing the value of the dollar to make U.S. exports more competitive and imports more expensive, so that we will consume fewer imports. He is trying to eliminate the U.S. trade deficit by treating the once universally respected dollar like the peso of a banana republic.

Sarah Palin has nailed cold what Bernanke is about:

“We shouldn’t be playing around with inflation. It’s not for nothing Reagan called it ‘as violent as a mugger, as frightening as an armed robber and as deadly as a hit man.’

“The Fed’s pump-priming addiction has got our small businesses running scared and our allies worried. The German finance minister called the Fed’s proposals ‘clueless.’ When Germany, a country that knows a thing or two about the dangers of inflation, warns us to think again, maybe it’s time for Chairman Bernanke to cease and desist.

“We don’t want temporary, artificial economic growth bought at the expense of permanently higher inflation which will erode the value of our incomes and our savings.”

When Bernanke said we are not “going to try to raise inflation to a super-normal level,” he blew it, says Krugman, and “there goes the best chance the Fed’s plan might actually work.”

What the Fed should do, he says, is change expectations “by leading people to believe that we will have somewhat above-normal inflation … which would reduce the incentive to sit on cash.”

But “sit on cash” is a definition of saving. Is saving bad? Once, Americans were taught that saving was a good thing.

Not to Krugman. He wants to panic the public into believing the money they have put into savings accounts and CDs will be rapidly eaten up by Fed-created inflation, so they will run out and spend that money now to get the economy moving again.

Whatever the economics of this, the morality of it is appalling.