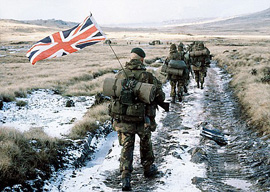 The thirtieth anniversary of the Falklands War is rolling around, and Argentina’s leadership is starting to sound the battle cry again. Buenos Aires is already pushing for sea and air embargos of the Falklands.

A British training mission in the area is scheduled to take place and include Prince William. Learning of this, Argentina’s foreign ministry referred to the young sovereign as a conquistador.

This led Prime Minister David Cameron to point out the islands’ inhabitants say they wish to remain under British rule. Argentine President Cristina Fernández de Kirchner then accused the PM of “mediocrity bordering on stupidity.” Last year she had referred to the UK as a “crass colonial power in decline.”

“The mental midgets leading Argentina never realized that had they simply asked for the Falkland Islands they once had a good chance of getting them.”

During the entire history of inveigling over these (until recently) relatively worthless rocks, every Argentine head of state, whether democrat or dictator, has made matters worse than they needed to be. Given that Great Britain from approximately 1945 has seemingly had no qualms about surrendering the Empire in toto, there must be a very good reason it clutches so desperately onto this sea-sprayed outpost.

Someone who claims to have been present in cabinet shortly after the surprise Argentinian invasion to “drive out the British” tells me that PM Thatcher pounded the table and said something to the effect of, “They can have the bloody islands, but they aren’t having them this way!” Which is the point.

The mental midgets leading Argentina never realized that had they simply asked for the Falkland Islands they once had a good chance of getting them. Instead, when every other corner of the world was balloting, plebisciting, and referenduming their way to independence from the Crown, the boobs in Buenos Aires decided to flex their muscles.

Only a madman or complete blunderer might have been convinced Great Britain would allow itself to be humiliated in such a fashion. Launching the entire war—if it can even be called that—showed less comprehension of reality than your average feature film.