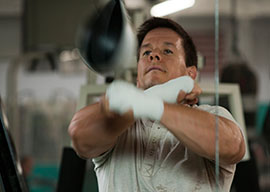 On Friday, I was shocked like the rest of America to learn that Richard Nixon had been taped in the Oval Office subscribing to a stereotype: “The Irish can”t drink….Virtually every Irish I”ve known gets mean when he drinks. Particularly the real Irish.”

On Saturday, I went to see The Fighter, a first-rate biopic about the pugnacious family life of boxer “Irish” Micky Ward, “The Pride of Lowell.” The Fighter is only the latest in a long series of Oscar contenders, such as Good Will Hunting, Mystic River, and The Departed, about sozzled Greater Boston residents pounding the hell out of each other. In recent years, awards-season movies have featured working-class Irish giving each other fraternal concussions almost as often as upper-class English serving each other tea in a marked manner. Both The Town and The Fighter are good bets to join The King’s Speech as Best Picture nominees.

Like Ben Affleck’s The Town, The Fighter is the kind of hybrid movie that benefits from doubling the number of Best Picture nods from five to ten. It’s half crowd-pleasing genre flick, half loose-limbed actors” showoff piece. In fact, the producers released two wholly distinct trailers. The mass-market preview features glossy footage of the hero’s inspirational comeback. The upscale trailer emphasizes cheap shaky-cam footage of Lowell lowlifes that makes The Fighter look like an ensemble drama.

“In recent years, awards-season movies have featured working-class Irish giving each other fraternal concussions almost as often as upper-class English serving each other tea in a marked manner.”

In truth, it’s both. That’s a difficult combination to pull off, but The Fighter succeeds.

Ever since Mark Wahlberg, a hard-working leading man in doubtful remakes such as Planet of the Apes, earned a Best Supporting Actor nomination for his formidable cop in The Departed, he’s been trying to pull this movie together. An authentic ex-juvenile delinquent from Dorchester, Wahlberg has wanted to get in again on the white-underclass fad before it’s mined-out by Cambridge boys such as Affleck and Matt Damon.

Darren Aronofsky was long attached to The Fighter but ultimately passed on it to make The Wrestler and The Black Swan. David O. Russell, who has been mostly idle in the eleven years since he notoriously started a fistfight with George Clooney on the set of Three Kings, parachuted in.