The Final Harry Potter: Tying it All Up With a Short Bow 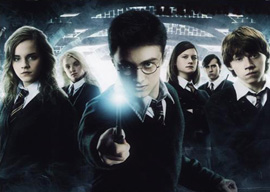 I never thought I’d say this about a Harry Potter movie, but the eighth and culminating installment, Harry Potter and the Deathly Hallows: Part 2, should have been a good half-hour longer. Instead, although saddled with the most convoluted plot of the series, it has the shortest running time.

Yes, I realize the film’s debut set global and national box-office records last weekend. And it has a 100% thumbs-up rating among Top Critics on Rotten Tomatoes. I’m seldom terribly contrarian about the basic question of quality. If audiences and critics are nearly unanimous in praising a new film, it’s likely quite good. So I walked into the theater looking for something new to say about why the Harry Potter series has enjoyed the kind of winning streak unimaginable a generation ago.

“Part 2 is not a worthy send-off. Surprisingly, disappointingly, it’s a bit of a squib.”

Each of J. K. Rowling’s seven novels follows her main characters through another year at the Hogwarts School of Witchcraft and Wizardry. The need to film the child stars in something close to real time before they superannuate out of all plausibility (by now, Rupert Grint as Ron Weasley is well on his way to looking like a redheaded Paul Giamatti) established a punishing one-movie-per-year pace. This slipped to one every 18 months for the third through fifth films. The sixth, Harry Potter and the Half-Blood Prince, was pushed back to a 24-month lag, seemingly endangering the whole project.

Yet given an extra half-year, The Half-Blood Prince, released in the summer of 2009, proved hugely entertaining. I started thinking about how the movie business had gotten more consistently competent. Hollywood may have made better original movies in the 1970s, but the industry then lacked reliable methods for making sequels that didn’t trash the brand. For every The Godfather: Part II, there was an Airport 1975, Exorcist II: The Heretic, and Jaws 2—junky movies without today’s usual level of corporate quality control.

Unfortunately, everybody is kidding themselves about the new movie being good merely because the series as a whole has deservedly earned affection. Part 2 is not a worthy send-off. Surprisingly, disappointingly, it’s a bit of a squib. At only 130 minutes, it is too rushed and skimpy to be suitably epic.