The Five Stooges of Cleveland 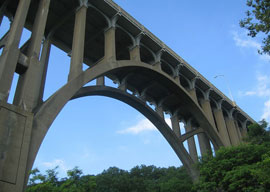 The International Workers’ Disco Party known as May Day came early to Cleveland this year, but instead of starting with a bang, it began with a profoundly dumb silence on the evening of April 30. That’s when five bumbling young males were allegedly unable to detonate eight pounds of the plastic explosive C4 they’d attached to a bridge south of the perennially maligned Rust Belt metropolis.

Although the press has mostly taken to describing them as anarchists, these comically inept five lions were also intimately involved with the Occupy Wall Street movement, which had taken a hiatus over the winter months because it was too frickin’ cold to topple the oligarchy.

It would be a public-relations apocalypse for the largely left-leaning press to admit that this drab and unwashed quintet of accused wannabe terrorist bombers was in any way involved with a movement approved by Nancy Pelosi, Barack Obama, and the Democratic Party.

It’s charming that anyone“communist, anarchist, fascist, or Polish”would want to occupy Cleveland. But according to an AP report, Occupy Cleveland spokesman Jacob Wagner initially conceded that although the “Cleveland 5” may have attended a few of their events, they were in no way “affiliated” with the group.

I suppose it depends on how one defines “affiliated.” Apparently it doesn’t involve acting as a spokesman for the group when the Cleveland Plain Dealer profiled one of their endless public temper tantrums in March. Nor does it involve staying at their Cleveland encampment while the press describes you as “one of the few remaining members of Occupy Cleveland’s physical presence downtown.” Nor does it involve posing for pictures claiming that not only do you represent Occupy Cleveland, you hope to expand the project into the surrounding suburbs. Nor does it involve organizing events for Cleveland with the word “Occupy” in their name. Nor does it involve signing a lease on a warehouse to provide shelter for a dozen Occupy Cleveland members. Nor does it mean anything when one, or even two, or, for heaven’s sake, three of the five claim not only to be “affiliated” with the group, they claim it was their employer. (A fourth claims Occupy Wall Street is his “Favorite Team,” while the fifth, bless the hidden dimples in his unshaved cheeks, apparently doesn’t have a Facebook profile.)

When finally forced to concede that at least a few of these would-be proletarian mujahideen were, OK, somehow involved with the group if only on the fringes, Occupy Cleveland spokeslady Debbie Kline still claimed they in no way reflected the fundamentally nonviolent doctrine of OWS. A subsequent press release featured this glimmering bauble of newspeak:

Occupy Cleveland has spoken out and worked against…occupations.

Now that we’ve made that clear and established that Occupy Wall Street is a peaceful, nonviolent, and unperturbably serene political movement, let’s meet our five contestants for Dumbest Accused American Terrorists of the New Millennium. If this is what the revolution looks like, the revolution sorely needs a style consultant (click thumbnails to enlarge):

Baxter, 20, was hospitalized in February after an apparent suicide attempt. At the time, Baxter, who claims to possess “sick ninja skillz,” was reportedly found with two knives. In 2008, he was arrested for writing the word BARF on a picnic table. A year later, he was arrested and charged with attempted murder for slashing his stepfather in the chest and forearm with a kitchen knife. (He pled to a lesser offense, and the conditions of his release included psychiatric treatment.)