The Folly of Liberal Imperialism 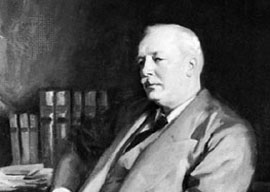 When, half an eternity ago, I was a small boy who collected stamps, I was very favorably disposed toward King Farouk. I noticed that Egyptian stamps were never the same in taste or quality after his overthrow, and in those days I judged countries and their regimes by the taste and quality of the stamps they produced. I am not sure that I was entirely wrong to do so: The larger and more garish a country’s stamps, the worse the state of its economy and/or the more repressive its political regime. And at least Farouk never tried to do any good, which is the most one can possibly ask of any national leader.

I was much taken at an early age by the uniforms of Egyptian pashas. They seemed to me something worth fighting for. And so when browsing in a secondhand bookshop recently (browse while such shops still exist), I came across a book published in 1911 called The Truth About Egypt by one J. Alexander, about whom assiduous research on my part”i.e., thirty seconds on the Internet”has failed to reveal any information, I knew that I had to buy it. This was not so much for the text as for the pictures: I could resist neither the faces nor the uniforms of Mustapha Pasha Kemal, Boutros Pasha Ghali, and Mohammed Pasha Said, with their wonderful mustaches, tarboushes, frock coats with gold frogging, and swords of office. How dull our modern politicians look by comparison. If they must torture us with their platitudes, could they not at least dress up a little? Who could compare pictures of Boutros Pasha Ghali, Prime Minister of Egypt, and of his grandson, Boutros Boutros Ghali, Secretary-General of the United Nations, and not lament the past? (Admittedly the prime minister was assassinated, but Madeleine Albright would have rejoiced if his grandson had, in this respect, followed in his grandfather’s footsteps.)

“At least Farouk never tried to do any good, which is the most one can possibly ask of any national leader.”

It turned out that the text was not without interest, either. Indeed, all meddlers in the Middle East would do well to read and ponder it. Though not intended as such, it is a testimony to the vanity of power, or of supposed power.

At the time of the book’s publication, Egypt had been under British occupation for twenty-nine years. The situation was legally complicated: Egypt had a Khedive, a hereditary head of state who, however, was under the Ottoman Sultan’s nominal suzerainty. But it was the occupying power that exercised veto power.

The main figure of the occupation was Lord Cromer, a scion of the Baring banking family, who was pro-consul in Egypt for a quarter of a century. He faced the difficult task of actually ruling the country while appearing not to do so by using a nominally Egyptian government administration that also played a double game of apparent subservience and visceral opposition.

Cromer was not entirely unsuccessful. He restored both order and Egyptian finances, the collapse of which was the ostensible reason for the occupation in the first place. He justified the exercise of his power by pointing to the public works carried out under his ultimate direction and by the improvement in the peasantry’s condition. Nationalist opposition to him was, in his opinion, almost entirely the ideology of the landowning class, bitter at the curbs on its own abusive power. He had little doubt that it was right for the Western powers, particularly his own, to read political lessons about how to run their affairs to backward nations such as Egypt which, however, would take a long time to learn them. He thought British power would last forever and did not at all foresee the catastrophic political incompetence that would lead to its swift evaporation”admittedly inevitable in any case.

Cromer was what was then known as a liberal imperialist: He genuinely and sincerely wanted to do good, especially for the oppressed and impoverished peasantry. He believed that a British form of government was best for Egypt in the abstract, however distant its concrete achievement might be.

The results of his rule are summarized in J. Alexander’s book as follows:

…the country…may be said to have been born anew during the last thirty years; and if ever there was proof of the futility of putting new wine into old bottles it is to be found in the condition of Egypt today, after the establishment of a modern system of government, education and justice among a people totally unprepared by habits, history, and environment to appreciate them. From the day that the yoke of oppression was lifted, from the day when liberty was assured the individual and a conscientious scheme of government instituted in the place of personal despotism”from that day, scarce thirty years ago, may be counted the successive stages of the so-called Nationalist, and ostensibly patriotic, feeling which has of late assumes such monstrous, hydra-headed proportions.