The Folly of Resentment 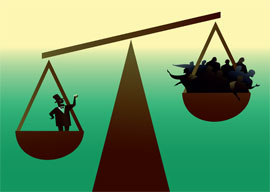 There is one group of people whom it is morally permissible to hate, and of whom in these times of speech codes it is allowed or even obligatory to speak hatefully: namely, the rich. This is rather odd when one thinks of it, for economic resentment was ultimately responsible for more deaths in the last century than racial hatred. Yet to be a racist is to put yourself outside the pale of decent society; to be an economic egalitarian is to establish your generosity of spirit and profound sense of justice.

Perhaps this is because this world’s rewards are not distributed according to anyone’s idea of how they ought to be distributed; that is to say, in accordance with anyone’s individual scale of values. They seem rather to be bestowed capriciously and not in accordance with merit. Some, of course, have merely inherited their wealth; others have made it in ways of which we do not approve or even despise. Not all rich people are well-behaved; indeed, they can be tactless, offensive, vulgar, and tasteless. When Mr. Ambani built his domestic skyscraper in Bombay I was appalled not by the expenditure (though I had walked through the slums of that city) but by the complete aesthetic worthlessness of what he built. To spend a billion dollars on a house and to detract, slightly, from the beauty of the world is, in a way, an achievement; but one of the functions of the rich is to preserve and increase such beauty. These days they don”t make a very good job of it; the rich these days seem often to have no better taste than the poor. One has only to consider the relative prices on the art market to understand that of all personal qualities, good taste is the rarest.

“Economic resentment was ultimately responsible for more deaths in the last century than racial hatred.”

Still, hatred of the rich, which people do not hesitate to express as if it were a virtue to do so, rests fundamentally on two human connected emotions, both of them unattractive: envy and resentment. It also rests on the primitive notion of an economy as being a cake of a fixed size to be sliced up according to some plan, just or unjust as the case may be. On this view, a crumb in one man’s mouth is a crumb taken from another man. Poverty is the result, therefore, of wealth: which is true enough if you define poverty as being a certain percentage of the average or median income, as is all too often done. If you define poverty as the lack of subsistence or even physical ease, it is quite otherwise.

In France, President Hollande, who during his campaign said (as if it were a sign of decency) that he did not like the rich”the rich of course being those who had more money than him”imposed a 75% tax on people earning more than a million euro ($1.3 million) a year. Initially, the Constitutional Court rejected this tax because the constitution forbids confiscatory taxes (France has an unfortunate history in the matter of confiscation), but the president stuck to his so-called “principles,” or at least to his election promise, and taxed the companies that paid their employees more than one million euro a year.

The regime of bread and circuses such as is now regnant in most Western countries is dangerously dependent for its stability on its circuses, and of all the circuses in Europe football is by far the most important. The Times of London, for example, devotes far more of its space to football than to foreign news, and no public figure would dare avow a lack of interest in football for fear of appearing to be an Enemy of the People. When I listen to conversations in the street, football rivals in importance difficulties in love affairs. A strike by football teams is therefore a serious matter; if it lasted or resulted in permanent damage to the standard football played, it could lead to social unrest.