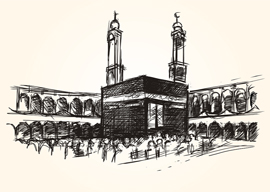 On May 22, Salman Abedi, 22, waiting at the entrance of the Ariana Grande pop concert in Manchester, blew himself up, killing almost two dozen people, among them parents waiting to pick up their children.

Saturday, three Islamic terrorists committed “suicide-by-cop,” using a van to run down pedestrians on London Bridge, and then slashing and stabbing patrons of pubs and diners in the nearby Borough Market.

By all accounts, the killers bore no special grudge against those they murdered. They appear not even to have known their victims.

Why, then, did they kill these strangers, and themselves?

A BBC eyewitness suggests a motive: “They shouted, ‘This is for Allah’, as they stabbed indiscriminately.”

The murderers were Muslims. The rationale for their crimes lies in the belief that their bloody deeds would inscribe them in a book of martyrs, and Allah would reward them with instant ascension into the paradise that awaits all good Muslims.

“There is an extremist school of Islam that needs to be purged from the West, even as this school of fanatics is seeking to purge Christianity from the East.”

Is there a strain of Islam, the basis of which can be found in the Quran, that would justify what the murderers did at London Bridge?

On Palm Sunday, an explosion in Tanta, 56 miles north of Cairo, killed 29 and injured 71 Copts as they prayed at the Mar Girgis church. A second blast at a church in Alexandria killed 18 and wounded 35.

“I call on Egyptians to unite in the face of this brutal terrorism,” said Ahmed el-Tayeb, the grand imam of al-Azhar, Egypt’s 1,000-year-old center of Islamic learning.

Yet, years of such atrocities have effected a near-complete cleansing of Christianity from its cradle provinces in the Holy Land.

If these persecutors and killers of Christians are apostates to Islam, headed to hell for their savageries, why have not all the imams of the world, Shiite and Sunni, risen together to condemn them as heretics?

Clearly, from the suicide bombings and shootings of civilians in the Middle East, now across the West, there is a belief among some Muslims that what the killers are doing is moral and meritorious—taking the martyr’s path to salvation.

When have the imams of Saudi Arabia, the Middle East, and West ever stood as one to condemn all such acts as against the tenets of Islam?

In condemning the London Bridge attack, Prime Minister Theresa May said that recent atrocities across England were “bound together by the single evil ideology of Islamist extremism.”

Correct. There is an extremist school of Islam that needs to be purged from the West, even as this school of fanatics is seeking to purge Christianity from the East.

We are at war. And the imams of Islam need to answer the question: “Whose side are you on?”

Are honor killings of girls and women caught in adultery justified? Are lashings and executions of Christian converts justified?

Do people who hold such beliefs really belong in the United States or in the West during this long war with Islamist extremism?

Other questions need answering as well.

Is our commitment to diversity broad enough to embrace people with Islamist beliefs? Is our First Amendment freedom of speech and of religion extensive enough to cover the sermons of imams who use mosques to preach in favor of expelling Christians from the Middle East and an eventual takeover of the West for an Islam where Sharia replaces constitutional law?