The Free, the Just, and the Ugly 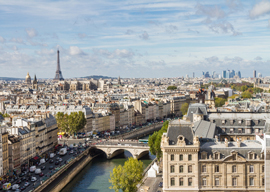 Returning recently to France from Germany, where I had given a talk on the ideological roots of ugliness (which might seem to some a rather peculiar and even inexistent subject), I was struck once again by the sheer inhuman hideousness of Paris: not the center, which remains the City of Light, but the outskirts, where more people live and breathe and take their being than in the center. One looks in vain for something that does not hurt the eye; the horizon and everything before it is a festival of architectural inhumanity. All that was built after the Second World War not only has no positive aesthetic value, but is to beauty what evil is to good. Of course, the sight is all the more painful because one contrasts it in one’s mind’s eye with the beauties of intramuros Paris. The trente glorieuses, the thirty years between 1945 and 1974 when the French economy grew at its fastest rate in history, were, architecturally speaking, the trente calamiteuses. There has been no recovery since.

I do not believe with Keats that truth is beauty and beauty truth; this is a dangerously romantic doctrine that can easily aestheticize evil. But it does not follow from the fact that beauty is not all-important or compatible with every other desirable thing in life that it is not important at all, or that its total absence does not have a disastrous effect upon the lives of those who suffer it. In fact, there is no virtue or quality that is all-important; wisdom is the deft juggling of the claims of all the disparate and incompatible virtues and qualities necessary for a good human existence.

“Beauty is tainted by injustice; and since nowadays we value justice, fairness and equality above all things, and make them the touchstone of value, beauty makes us uneasy.”

One question on which I have thought in my own little way is whether ugliness is the mere absence of beauty or something more positive. (I am thinking not of Nature”some of whose manifestations are very ugly”but of the works of the human hand.) The question has the same form as that of the nature of evil: is it an absence or a presence, positive or negative?

The theory of absence might suggest that without goodness or beauty the default setting of the human world, as it were, would be to evil and ugliness. The theory of presence would suggest the opposite: that without evil and ugliness, the human world would be set to goodness and beauty. But whatever the correct theory in the abstract, I think that in the modern world there is a definite and deliberate striving toward the ugly, something that is relatively new in the immense historical repertoire of human foolishness.

I once asked an architectural historian why it was that, after so many hundreds of years of architectural achievement, we in Europe were all but incapable of building an aesthetically decent house, let alone an elegant and achieved public building. He did not deny the premise of my question but replied that it was because of modern techniques of building and the materials architects had to use (no choice in the matter). In other words, it was a purely technical matter.

I did not believe it then and I do not believe it now. But I do believe that there are economic and quasi-economic reasons for building as we build”cheaper, faster, easier, larger and so forth”but the irresistible force of these arguments in practice indicates our scale of values. It is not so much that we cannot, it is that we will not.

In the early eighteenth century, Alexander Pope satirized the rich English merchants, gentry and aristocrats who, having travelled to Italy, built themselves magnificent houses in a copied style supposedly inappropriate to the climate, and who were:

Proud to catch cold at a Venetian door;
Conscious they act a true Palladian part,
And, if they starve, they starve by rules of art.

Pope is here mocking pretentiousness, but not only did his targets actually have taste, they were prepared, as we are not, to sacrifice their own convenience to its expression, and even willing (according to Pope) to endanger themselves for it. There was something magnificent and also public-spirited in their attachment to what they saw as beauty, no doubt liberally mixed as it was with the desire to impress and overawe others.