The Freedom of Disunity 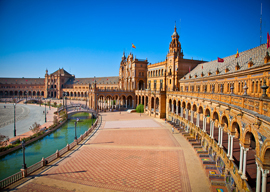 Last week I gave a talk on my pet topic of bullfighting in front of various politicos from Spain and Britain at the Reform Club in London, which was founded in 1836 in the wake of the Great Reform Act of “32 that was the first step toward universal enfranchisement in Britain.

The most interesting conversation was in the drinks and mingle beforehand when I stood by as a senior Spanish diplomat complained to a senior Conservative MP about an article in the Tories” stalwart newspaper, The Daily Telegraph, suggesting that British expatriates in Spain withdraw their money from Spanish banks.

It was fun in a Schadenfreude way to watch the MP, a friend, squirm a noncommittal response. After all, what could he say? Yes, it was irresponsible from Spain’s point of view to suggest a million of its more cash-rich inhabitants vacate the vaults of its crumbling banking system, but from the perspective of an elected representative of the British public, it was eminently sensible advice. (Meanwhile, the rest of his party seems to be tearing itself apart once again on the subject of Europe, thus committing a sustained electoral suicide.)

“Europe must now be allowed some of the liberties of adulthood so its component states can get up off their knees in their own way at their own pace.”

In Spain, I can see the country’s economic implosion reaching catastrophic levels. Unemployment here in Andalusia is well over 50% among the young, and in some parts it’s over two-thirds. As Madeleine Albright once remarked of the Middle East, only bad things can happen when all your young men are hanging about on street corners. Pro- and anti-fascist slogans daub the walls even in the smarter barrios.

The only reason Spain has not yet had the sort of civil unrest that Greece has is the strength of the family and the Church. That the fiesta nacional, bullfighting, is seen at the highest levels as a part of this bulwark against social breakdown is evidenced by the Spanish government voting to make it a protected cultural interest earlier this year.

There is only so long before these societal defenses become irreparably eroded. The real cure for Spain’s self-induced malaise would be to remove itself from the eurozone and return to the peseta. Austerity cuts are necessary but there is no concomitant surge in investment or signs of growth to add the carrot of hope to the stick of welfare withdrawal. IMF loans and grants create nothing but dependency; it is akin to telling a heroin addict he can have unlimited methadone if he starts getting out of bed at a decent hour in the morning and wearing a suit even though there are no job interviews for him to attend.

Spain has always had healthy and sustainable sectors of its economy: to name two tourism and agricultural produce for export. However, the apartments I rent are scandalously cheap in terms of what the landlord makes in profit”barely enough to cover his costs”while being scandalously expensive in terms of what exits my British bank account. This is because the prices are chalked up in a currency that does not reflect Spain’s weakness but Germany and France’s relative strength. A state declaration of bankruptcy would have little effect on international markets” confidence”they already think Spain is a basket case”but a return to the peseta would drop my rent to a quarter of what it now is, even after the subsequent bout of inflation a changeover would cause.

If Spain was the first country to leave the eurozone, there would be a huge surge in tourism, especially from an impoverished Britain craving a sunny respite from its own economic gloom, and the tourists would arrive in droves with pockets full of hard foreign currency. The same would go for Spain’s exports. It would also allow the government to reduce interest rates to encourage growth, returning a vital fiscal tool to national control.

Such a bold economic move would restore domestic faith in Spain’s conservative government, which is currently derided for its complete inability to recover at least some of the country’s fortunes after their socialist predecessors so irresponsibly squandered them. (Spain’s property bubble was directly encouraged by the then-Prime Minister Zapatero: Entire towns of new buildings stand empty across Spain, useful for nothing but as backdrops for post-apocalypse scenario film sets.)

The reason no one in the government has the boldness of vision to see this is in part due to long entrenched habit and groupthink, but also a historical insecurity about Spain being seen as backward and somehow outside of civilized Europe. The Euro makes Madrid think it is “twinned” with Paris and Vienna. My friends in Seville still sign off their elegantly formal letters to me with “We await your return, here, close to Africa.” (Few seem to know that Spain still holds two enclave cities in Morocco on the north coast of that continent, Ceuta and Melilla.)