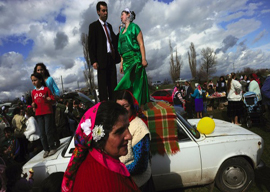 Is this a Jewish joke or a Gypsy joke?

What do you get when a Jew and a Gypsy go into business together? A chain of empty stores.

About fifteen years ago, a friend of mine opened a shop selling fabrics and other household staples in a Tuscan town. She was English, beautiful and an innocent in the world of commerce. The other shopkeepers adored her, because she and her daughters charmed them and brought a lot of trade to the cobbled main street. Whenever Gypsy caravans camped outside the town walls, Roma women in brightly colored gowns would stroll casually from shop to shop. Keeping wary eyes on them were robust Tuscan women shopkeepers. When the Gypsy matrons went into my friend’s shop, the other lady shopkeepers followed them inside and guarded my friend’s stock until the women left. No one said anything. It was clear the Italians protected her because they suspected she was not canny enough to prevent the transfer of baubles into bags without money changing hands. If the assumption was that the Gypsy women would shoplift if given a chance, they did not get the chance.

My friend’s husband hired some Gypsy laborers from Romania a few years later to do some building work on his house. The workers lived with him for months, worked hard and never stole anything. They loved beer, but were not drunkards, and spent most of their money on telephone calls to their families. When the job was complete, they took enough pay back to Romania to restore their own houses (which had no electricity, part of Romania’s official neglect of them) and perhaps open a small business. I have never seen a British builder work as hard or with as much good will as they did.

My old friend, the late Anthony Sampson, wrote a biography of his paternal grandfather who led a second, secret life as a Gypsy. The Scholar Gypsy: The Quest for a Family Secret

tells the story of John Sampson, a respected philologist who died in 1931 when Anthony was five. The elder Sampson wrote the definitive dictionary of the Romani language as spoken in Wales in the late 19th century, The Dialect of the Gypsies of Wales. While living as a respectable late Victorian gentleman with his wife and three children (one of them Anthony’s father), he had a secret Gypsy wife named Gladys Imlach. She gave him a Gypsy daughter, whom he adored and whom Anthony knew as Aunt Mary. The Gypsies called him the Rai, meaning a “gentleman Gypsy.” His grandson, who wrote best-selling

on corporate malfeasance in the global economy, was regarded by his colleagues as the “gentleman journalist.” 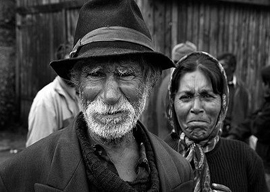 Clover Stroud, an engaging and popular British reporter, wrote recently in the Spectator of her lifelong love affair with the Gypsies who roam the English countryside. Her envy of Gypsy children’s freedom began in her school days. While regretting English “Gypsy-bashing,” she observed that “there’s a part of us that will always hunger for a caravan and camp, for the lyrical romance of the open road.”

The lyricism of the open road, however, has eluded French President Nicolas Sarkozy. Sarkozy nearly went to war with the European Union last week in defense of his decision to deport Gypsies en masse to Romania and Bulgaria. The EU justice commissioner, Viviane Reding, had threatened him with prosecution under EU laws forbidding the punishment of people based on their ethnicity. Mme. Reding reminded Sarkozy that Europe had turned its back on mass deportations of racial minorities after the Second World War. Sarkozy went to an EU summit last Thursday to scream about what he called “an insult, a humiliation, an outrage.” His language echoed then-mayor of Chicago Richard J. Daley’s indignation against the press forty years ago: “They have vilified me. They have crucified me. They have even criticized me!”