The Future Isn”t What it Used to Be 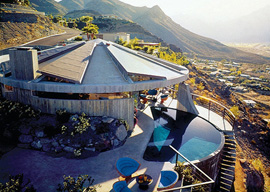 With Iron Man 3 hauling in $174 million at the box office last weekend, this is a good time to pay tribute to a great architect whose hold on the American imagination is finally getting the respect it deserves: John Lautner.

No matter where they’re filmed or when they’re set, the Iron Manmovies take place, at least aesthetically and psychologically, in the shiny, optimistic, future-infatuated Southern California that peaked in the early 1960s. Billionaire Tony Stark’s Iron Mansion in Malibu, which the evil Mandarin demolishes in Iron Man 3, is a fictitious CGI homage to the sometimes hilarious”but often surprisingly lovely“science-fiction houses and coffee shops, gas stations, and motels that Lautner erected all over the Los Angeles area from the 1930s into the 1980s.

Academics despised Lautner, but airplane and movie people loved him, and they do to this day. Quentin Tarantino has set many a scene in a Lautner-inspired eatery, such as Jack Rabbit Slim’s in Pulp Fiction.

Lautner, a protÃ©gÃ© of Frank Lloyd Wright, was the finest exponent of the boyish fantasy school of design”Tom Swift books turned into cantilevered Googie drive-in restaurants”that is the indigenous style of the Southern California car culture in which I grew up. Lautner’s school of commercial architecture required an unprecedentedly broad and affluent middle class, one perhaps never seen in world history before Los Angeles in the 1940s.

“Back in Burbank in 1960, did anybody doubt that the advent of flying cars would be long delayed?”

Lautner is said to have invented the Googie-style of commercial architecture with three Coffee Dan’s restaurants. After the war, this Lautner Look became the embodiment of the postwar economic boom as the American masses attained disposable income, mobility, and a hankering for style uninhibited by the dictates of elite taste. In 1952, Columbia U. professor and modernist mandarin Douglas Haskell derisively coined the term “Googie architecture” in response to Lautner’s 1949 Googies Diner in West Hollywood at the corner of Sunset Boulevard and Laurel Canyon.

The heart of Googie America might have been the stretch of the eastern San Fernando Valley between Lockheed Airport (now called the Bob Hope Burbank Airport) and the movie studios near the Hollywood Hills. Burbank would have been a fitting home for Disneyland (where the Googie Tomorrowland was the culmination of SoCal futurism). But Walt Disney, whose contributions to the 1964 World’s Fair inspired Iron Man 2, couldn’t find enough contiguous land near his studio.

Today we are constantly informed that the American Dream is about immigrants coming to America, but back then, it was about Americans, after years of sacrifice during the Depression and WWII, finally being able to afford to drive a new car to a new restaurant. When average people such as my mother and father (who, after a spell at a flying car company, worked at Lockheed for four decades) had some cash, they liked to go to the sweeping metal-and-glass Bob’s Big Boy drive-in on Riverside Drive in Burbank. Bob’s was just down the street from the hot-rod studio of George Barris, the King of the Kustomizers, who helped inspire Tom Wolfe’s literary breakthrough The Kandy-Kolored Tangerine-Flake Streamline Baby.

While getting a Ph.D. at Yale, Wolfe had spent years hanging out with architecture students being indoctrinated in Yale’s dour Bauhaus purism. Wolfe’s 1963 visit to Southern California, with its flat class structure of skilled technicians who could afford to spend money pursuing their own techno fantasies, came as a liberation that ignited his titanic career in American letters.