The Future of Chinese Is English 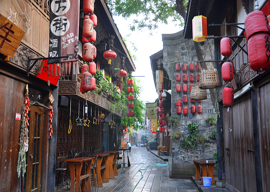 Joseph Campbell suggested as a matter of fact that Westerners do not consider the Chinese to be people. It’s why the Chinese have a portrait of Mao hanging from one “Gate of Heavenly Peace,” and we get our pictures taken in front of it like it’s the Parthenon. It’s why Mao’s regime is technically still in power yet we keep giving them the Olympics. It’s why the Pope doesn’t hold the Church in China to the same standards he holds the Church in Europe. It’s even why 87,000 Chinese died in an earthquake not ten years ago though it barely moved the needle on our cultural seismograph.

Campbell gave no explanation as to why this is, though the implication seems to be the Chinese look different than we do. This may be a factor in our “othering”—to borrow a millennial usage—but what distinguishes the Chinese more than their almond eyes is the fact that, on a fundamental level, they don’t think like we do.

Language is a tool of cognition. To understand how people think, first understand their language. The main distinction about the Chinese language is it’s symbolic as opposed to phonetic. It’s as different from English as the Koran is to the Bible. The dissimilarity runs so deep that we cannot compare them to each other, only with each other.

“The Chinese language is as different from English as the Koran is to the Bible.”

Chinese has more than 50,000 pictures, each representing a concept. A picture of a flower means “flower,” a picture of a house means “house,” and a picture of a middle-aged man means “dad.” It’s the kind of language you would come up with if you were an uncreative third grader. It’s limited as a tool of cognition in that it doesn’t challenge the speaker to go beyond the perceptual level of awareness. The allure of symbolic language is that it substitutes memorization for understanding.

Not coincidentally, communism offers the same allure. It’s a concrete idea that solves every societal problem in one fell decree, so there’s no point in learning much else. When the Chinese do adopt free enterprise, they only do so because it makes sense perceptually—that is, it’s practical.

Western language, however, comprises sounds that are stitched together to create concepts, which leads to a fluidity of thought. It’s the difference between learning an instrument by reading music rather than rote. It’s why we have more novels. It’s why we’re more dedicated to abstract fields like philosophy and psychology. It’s why we have more Marxist T cells.

While the Chinese receive words from government councils, we create words from investigating reality. Writing, thinking, and discussion invariably lead to new concepts. Merriam-Webster responds to us, not the other way around. Thoughts are legislated not by the government but by a grassroots action. It’s the founding of America in linguistic format.