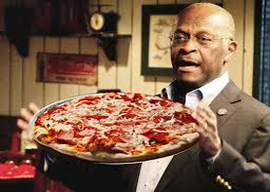 A recent Quinnipiac University poll shows Herman Cain solidly in the lead in the race for the Republican nomination. His surge in the polls has lasted for well over a month and shows few signs of abating, although it remains to be seen how the recent sexual-harassment allegations will affect him.

Cain’s enduring popularity is a cause for concern because, well, he’s a stupid, stupid man.

Despite his heavy reliance on simplistic talking points early in the campaign, I initially didn’t think Cain was any duller than the average politician. He was a successful CEO, after all.

I began to have doubts when I saw him discuss abortion on Stossel. There’s only one way to square the statement “Abortion should not be legal” with the statement “That’s her choice [whether to have an abortion or not], that is not government’s choice”—Cain doesn’t understand what it means to be pro-choice or pro-life and is incapable of articulating a coherent opinion on the issue.

An isolated incident, maybe? Unfortunately not. His knowledge of foreign affairs is abysmal, and there’s no indication he’s interested in addressing that deficiency. In an interview with Chris Wallace on Fox News Sunday a few months back, it was obvious Cain had no idea what the Palestinian “right of return” was, although that didn’t stop him from firmly supporting Israel’s position—about which he apparently knew nothing. But Cain didn’t exactly hit the books after this embarrassing gaffe. Last month on Meet the Press, Cain admitted to host David Gregory that he was unfamiliar with neoconservatism—the philosophy that guided the Bush Administration’s foreign policy for eight years.

Some might be concerned that a man who could be the next president is so ill-informed about such basic political issues. But Cain thinks it’s funny. He recently told one interviewer, “I’m ready for the ‘gotcha’ questions and they are already starting to come. And when they ask me, ‘Who is the president of Ubeki-beki-beki-beki-stan-stan?’ I’m going to say, ‘You know, I don’t know. Do you know?’” Well, Uzbekistan is actually an important theater in the so-called War on Terrorism, so it might be helpful to know that the corruption in Islam Karimov’s regime threatens the northern supply route to the US government’s puppet in Kabul.