The Gayest Study Ever 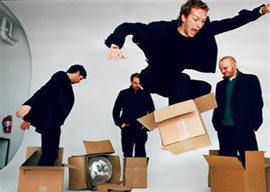 A recent study from the University of Michigan finds that the ever-popular youth expression “that’s so gay” is actually harmful to gay, lesbian, and bisexual students.

According to CBS News:

Coming from Detroit”a city whose citizens live under the constant threat of far more concrete forms of harm than colloquialisms”the study claims that the near-ubiquitous phrases “that’s so gay” and “you”re so gay” are not merely harmless expressions. The offending phrases have long been used on campuses to denote lack of coolness, insufficient fashionableness, or, in extreme cases, total and complete lameness. But now it seems they may actually pose a health threat to “sexual minorities” at high schools and university campuses.

“When did the homosexual community gain exclusive rights over the term “gay,” anyhow? After all, they stole it from the happy community.”

Head researcher Michael Woodford says that the phrase “you”re so gay” is subtly hostile because it suggests “that there is something wrong with being gay.” (Apparently he’s been too busy conducting bogus academic studies to ever watch an episode of Seinfeld, or else he”d realize he’s begging for a joke with that line.) He goes on to say that “hearing such messages…can cause stress, which can manifest in headaches and other health concerns.”

So what’s the solution for all those gay students taking Advil and leaving their shawarma platters unfinished because of all this horrifying stress?

Woodford issued a press release that answers the question:

Policies and educational programs are needed to help students, staff and faculty to understand that such language can be harmful to gay students. Hopefully, these initiatives will help to eliminate the phrase from campuses.

Woodford isn”t clear about how exactly one might go about “eliminating” a slang expression from common usage. Fines? Public flogging? Plainclothes Speech Police handing out tickets whenever they hear somebody call a pair of shoes “gay”? It would be a daunting task for the enforcers of correct speech.

“That’s so gay” is one of contemporary slang’s more durable pejorative phrases. And until fairly recently, no one with an IQ larger than their hat size needed to have it spelled out that in certain contexts the term has nothing to do with sexual orientation.

In my high-school years, “gay” was commonly used to mean unfashionable, tacky, or uncool. But while most of the cultural effluvia from my high-school years have gone the way of Spandau Ballet, using “gay” as a synonym for “unhip” or “annoying” seems to keep creeping back into common usage with remarkable staying power. “Cool” would seem to be the only other term that has successfully passed through several generations of high schoolers without losing its popularity. (A small achievement, perhaps, but when was the last time you heard anybody use “groovy,” “nifty,” or “Daddy-O” in a sentence?) Is there just something about calling annoying things “gay” that instinctively feels right, especially to young adults?