The Ghoul Was Truly Cool 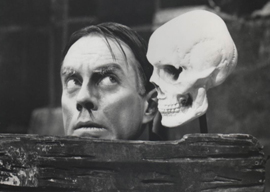 CHICAGO”The death of an actor, especially a character actor, is always a profound event, because at that moment all those years spent in shabby makeup rooms pop into sharp relief, revealing rivulets of love, hate, half-love, friendship, mock friendship, commerce, broken dreams, and forgotten people that have attached themselves to what has inevitably been a messy life full of misremembered colleagues, shady producers, late-night revelry, fleeting triumphs, and shows that closed out of town.

The 98 years of John Zacherle’s life, which ended last week, were an exception in that he appeared to recall and treasure even the tiniest participant in the smallest show. I worked with him four times because we were members of what may be the world’s smallest acting fraternity”late-night TV horror hosts”and John was the czar, the founder, the pioneer of that oddest of postmodern vaudeville acts.

If this obituary were a 1950s black-and-white horror movie, we would begin with a close-up of the British explorer Sir Leonard Woolley, tricked out in pith helmet, puttees, and lambswool jacket, bound for the Sumerian plain, there to excavate the Royal Tombs at Ur, after which he would declare, “Eureka! Here all civilization begins!”

Only in this case the excavation would unearth the television studios of WCAU Channel 10 in Philadelphia”actually located in the Main Line suburb of Bala Cynwyd”where in 1957 a program called Shock Theater launched the parasitic pseudoscience of horror hosting.

At this point I can hear the hysterical screams emanating from the West Coast:

What about effing Vampira, DUDE?

So pardon the interruption while I digress into yet even more arcane regions of popular culture.

“Zacherle developed a following so loyal that 50 years later, people were still coming up to him at fan conventions and telling him how much they loved specific episodes.”

Vampira was a character invented by one Maila Nurmi, a Finnish-American chorus girl and pinup model who had breasts the size of horned Viking helmets and a tight black cleavage-enhancing costume modeled after a character in the New Yorker cartoons of Charles Addams, whose work was invariably described as “macabre.” (Digression within the digression: Addams studied architecture at the University of Pennsylvania. If you go to the Charles Addams Fine Arts Hall on the Penn campus, you can see outdoor sculptural silhouettes of his Addams Family figures, and the one in the middle looks a lot like Vampira. So both claimants to the horror-hosting birthplace originate spiritually in Philadelphia.)

Vampira performed horror-themed comedy sketches before and during the movie that had nothing to do with the movie. She was, in fact, better known as a party-girl-around-town than she was as a movie hostess, filling the gossip columns with her cosplay exploits while giving canned, pun-filled interviews to what passed for feature reporters at the time. Hers was a novelty act that happened to be wrapped around a movie. To hardcore devotees of schlock culture, she is best known for her scenes in the Ed Wood “worst of all time” classic Plan 9 From Outer Space, in which she wanders trancelike though a graveyard, arms held straight out in front of her, like a windup mannequin whose battery is running down. Vampira was all about the pale white body”those Finns don”t suntan”stuffed into the structurally improbable black dress.

Zacherle, on the other hand, was all about the movie. He, too, had a toy box full of props, gimmicks, and corny gags, but he always related his material to the movie at hand, even going so far as to insert reaction shots of himself into scenes, using the Kuleshov effect pioneered by Sergei Eisenstein 30 years earlier in films like Battleship Potemkin. (Just trust me, that’s what he was doing.) The result was that Zacherle developed a following so loyal that 50 years later, people were still coming up to him at fan conventions and telling him how much they loved specific episodes.

(By the way, before we leave the world of late-night horror theory, I should point out that the two styles of hosting have both flourished to the present day, with one school using the movie as a springboard for jokes and the other school using the movie as the inspiration for both comedy and commentary. Vampira’s throne was inherited by Cassandra Peterson, whose Elvira character is, in fact, based on Vampira. Cassandra is a very generous performer I”ve worked with many times, and her act is so perfected by now that she doesn”t, in fact, need a movie at all to make it work.)

My point”to return to the excavations of Sir Woolley”is that there were other cities before Ur, but there’s a reason the British Museum accords it preeminence as the founding city of Western civilization. The dark spirit that crawls up out of the subterranean tunnels of the Royal Tombs and haunts the future is not Vampira but “Roland,” pronounced Roe-LAHND, the Dracula send-up character invented by John Zacherle in 1957 at WCAU.

I”ll leave it to the fan press to chronicle and archive the dozens of shows Zacherle appeared on during the next five decades, but suffice it to say that it’s the rÃ©sumÃ© of a dedicated character actor who loved the process. When I met him in the early “90s, he came equipped with his own makeup kit and a suitcase full of props, including a cauliflower he used to simulate a human brain as well as various exotic liquids to gore it up with.

“I have other ideas as well,” he said, lifting those coal-black eyebrows in a sly preperformance mockery of himself.

Zacherle burst into prominence during the Bronze Age of television, a time when, remarkable as it may seem, station managers had trouble filling up the programming day. This was especially true at independent stations like WCAU, which was owned by Philadelphia’s great afternoon tabloid the Bulletin. For after-school programming they would frequently raid the archives of movie studios, which had hundreds of short films produced during the Depression years in order to fill out four-hour double-feature blocks. The studios considered these one- and-two-reelers worthless, only to discover that TV stations would pay endless licensing fees for forgotten programmers like The Three Stooges (Columbia Pictures) and The Little Rascals (Hal Roach Studios).

But the studios were still wary of television and didn”t want to give up their feature films. That started to change in 1957 when RKO Pictures went out of business and the first complete motion-picture library became available for licensing. Fortunately for Zacherle, that library included all the films produced in the 1940s by RKO’s B-movie horror unit. That forgotten enclave was run by one Vladimir Ivanovich Leventon, better known as Val Lewton, a failed Russian-American novelist-turned-director who made his greatest contribution to the history of the world by overseeing such beloved titles as The Leopard Man, Bedlam, Isle of the Dead, Cat People, I Walked With a Zombie, The Body Snatcher, and The Ghost Ship. These leftovers from the dying Hollywood studio system would become the meat and potatoes of the first television program to thrive in the literal and figurative graveyard shift.