The Girls Guide to (Buying and Selling) Diamonds 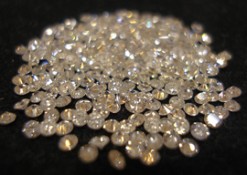 Beyond Benalmadena on Spain’s famous Costa del Sol lies the town of Fuengirola. It is a sprawling commercial nightmare of a place, a tentacle of the once beautiful Torremolinos, whose sole claim to fame was Lord Kagan of Gannex, that nefarious old crony of Harold Wilson who decamped there sometime back in the dark ages. Nevertheless it was Fuengirola for me last weekend, dispatched by my mentor William H. Gimlet on a fact-finding mission regarding diamonds.

Fuengirola is home to a number of diamond experts and Gimlet’s friend Anthony, one of a long line of Antwerp diamond cutters, resides there during the summer months. Anthony had just returned from Kimberley, South Africa, where Gimlet had sent him to look over the Koffiefontein mine, which is 70% owned by Petra diamonds, purchased from De Beers in July 2007. “I can see why Gimlet likes Petra,” said Anthony, “it is a very well-organized company.” He went on to explain that in spite of the fall in rough diamond prices in 2009, the future for the market looks promising.

Anthony is optimistic that by 2011 we could expect a renewed bull market. Petra Diamonds has purchased four mines from De Beers: Koffiefontein (70% Interest), Kimberley underground (74% Interest), Cullinan (37% Interest), and Williamson (75% Interest). The Cullinan mine east of Pretoria, named after the owner of the mine Sir Thomas Cullinan, has in its time produced some of the most famous diamonds in history. In January 1905 Frederick Wells, a surface manager of what was then called The Premier Diamond Mining Company, found the Cullinan diamond, the largest rough gem quality diamond ever exposed. From this was cut the Great Star of Africa at 530 carats and The Lesser Star of Africa at 317 carats, both of which are to be found in the Crown jewels of the United Kingdom. More recently in 2009 the same mine produced a 507 carat rough diamond, as yet unsold.

“The combination of good management, proven mines, sensible capital spending and a bright outlook for the market make Petra a good buy.”

“What you need to understand,” said Anthony (I absolutely detest people who say that), “is that Petra is very well structured. They have withdrawn from Angola which will save them lots of money, are spending wisely which will give them future growth, have done intelligent deals with De Beers, and are well set for a rebounding rough diamond market.”

I asked Anthony what would make the rough diamond market rise.

“Supply and demand,” said Anthony. “There is expected to be an increase in demand for rough diamonds and quite simply that demand cannot be met without a significant rise in prices.”

Apart from the acquisitions from De Beers, Petra holds the largest diamond prospecting area in Botswana and a stake in the Kono kimberlite fissure project in Sierra Leone. The advantage of withdrawing from Angola is that the company can now focus on its South Africa and Tanzania assets. The combination of good management, proven mines, sensible capital spending and a bright outlook for the market make Petra a good buy. That is Gimlet’s opinion too. The company is currently trading at between 65 to 70p. Anthony said he considered that a target of 120p was realistic. “The very same figure Gimlet put on it.”

In other market news, on Saturday evening Anthony and I ventured out from Fuengirola to dine with a young lady called Ettie Burklestein who had just returned from Tel Aviv with a terrible tale to relate. Her mother, now in her 70s, had recently been admitted to hospital for a minor back operation. During her absence, Ettie had taken the opportunity to make a few improvements in the house, one of which was to change the mattress on her mother’s bed. It was a lumpy, worn out, horrible old thing, not even fit to be given away. Instead, Ettie had bought her a new sprung mattress, convinced that it would be better for her mother’s back.

In past times people kept their money hidden in all sorts of strange places. The idea of creating banks was so you did not have to. In those days there existed such things as bank managers, decent people you could visit or talk to on the telephone. It was a reassuring feeling and was the foundation of a good relationship between a bank and its customers. Apart from other things, one role of a bank was to look after what BP Chairman Carl-Heinric Svanberg calls “the little people.”

, in which he talks of automaton conformity. He warns us how the individual will one day be devoured by giant mechanical cog wheels that whirr around without any point of contact. That day is surely upon us. Consumed with avarice to show bigger and bigger profits, the support banks are giving to small businesses today is pitiful. From £991m a month in 2008, it fell to £663m a month in 2009 and to £564m a month in 2010. While Lloyds is about to post a profit of about £1bn for the first half of the year, it is sickening that by failing to give greater assistance to small companies they are negligently jeopardizing economic recovery.

The sad truth is that while such base deformities of nature as Fred the Shred and his greedy pals are allowed are allowed to roam in the yard, the little people who are fighting for survival are left helpless by the striped tie, self aggrandizing creeps who could and should be supporting them. Truly there is something rotten in the state of banking!