The Golden Dodo Bird in the Sky 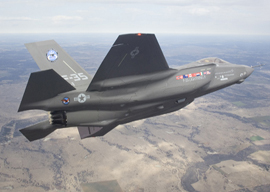 The F-35 is the latest marvel brought to us by the military-industrial complex. It’s presently years behind deployment schedule. It is also the most expensive military procurement program in American history. The projected cost of an F-35 will go as high as $185 million if you believe the Wikipedia entry. The F-35 program, including production and operation, could cost taxpayers around a trillion dollars.

The F-35 is expected to do everything. It is supposed to be used in different roles by the Navy, Marines, and Air Force, something no jet aircraft has accomplished by fiat. We tried and failed at this “one plane to rule them all” concept before with Robert McNamara’s bizarro F-111, a plane so bad it was nicknamed the “Aardvark.”

“Bolt-on guns don’t work any better than bolt-on boobs; they tend to point in the wrong direction.”

Even the military admits the F-35 is riddled with horrendous design flaws, such as the wings potentially falling off. In an incredible display of military intelligence, the defense department put the project on probation a few months ago. The Marines say they don’t want the Marines “brand…weakened” if the F-35B program fails. I’m trying to imagine a real Marine like Chesty Puller worrying about “brand weakness.”

The role the F-35B fulfills is one of close air support: blowing up bad guys on the ground who are harassing the troops. The best close air support aircraft in the present inventory is the unloved A-10 Warthog, a jet which the Air Force has been trying to kill for decades because it is low-tech, slow, and has an unglamorous role supporting the ground pounders. The A-10 works well in part because it goes slow and because of its armor. It can get very close so it can see its target. The A-10 also has a Brobdingnagian cannon with which to smite the enemy. The plane was designed around the cannon and the 1,200 rounds of ammunition it carries. The F-35B has no cannon. Despite its alleged purpose as a close air support aircraft, the F-35B only has a cannon as an add-on accessory, and the add-on can only carry 200 rounds of significantly less potent ammunition. Bolt-on guns don’t work any better than bolt-on boobs; they tend to point in the wrong direction.