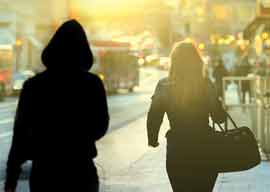 One of the biggest viral stories on social media last week was a laughably idiotic Finnish “how to” video that ostensibly demonstrates the proper way for women to defend themselves against rapists. The video, produced by state-run broadcaster Yle, reveals the top three police-certified methods that women should use against an attacker: “No,” “Push,” and “Handbag.”

In the video, a young blond woman, trudging her way down a snowy street, is accosted by a white ne”er-do-well (needless to say, the Finnish media would never dare portray the attacker as a nonwhite immigrant or “refugee”). Upon being grabbed by the unwelcome roisto, the young lady turns and forcefully shouts, “Ei!” (“no”). Humiliated and defeated, the Bieberesque thug sheepishly relents and walks away. In scenario No. 2, the pesky grabber returns, this time to be met with a two-handed open-palm push (accompanied, bafflingly, by a Jedi-type repelling force). Again, the attacker yields, unable to pierce the impenetrable defense. Finally, in scenario 3, the woman is forced to bring out the big guns”her handbag, which she swings with grit and determination at her assailant, who cowers and runs in abject terror.

The accompanying article on the Yle website informs readers that the actions depicted in the video represent the limit of what a woman facing a potential rapist is allowed to do; anything more would constitute “excessive force.”

As should have been expected, the video was met with much-deserved online ridicule. From News.com.au:

The anti-rape video has been likened to advice given by the mayor of Cologne to remain at “arm’s length” from attackers…. Finnish social media users were scathing. “It’s a shame you”ve only made this video now,” wrote Ville Mikkonen. “This would have come in handy on New Year in Helsinki, Cologne and elsewhere.” Some questioned whether the video was a joke or a Saturday Night Live sketch…. Many were simply angry. “It’s not even funny anymore, but really, really pathetic that it’s come to this,” wrote Jaana Tuukkanen.

Facebook users from around the world have pilloried Yle’s official page with hundreds of derisive comments. Several Americans have commented to the effect of “It won”t be long before these types of videos are forced upon us here.”

“The U.S. is not yet Finland. We still have the ability to create enough vocal outrage that the government will back down.”

“Won”t be long”? Have some faith in your country, why don”t ya? The U.S. under Obama may no longer lead the world in areas like science and technology, but dammit we”re still No. 1 where it counts”social justice! U.S. government leftists produced a much worse version of that Finnish video, and they did it back in 2013. Yes, our politically correct social engineers beat the Finns to the punch by three whole years. And the production of our “nonviolent rape defense” video wasn”t left to a bunch of glorified Youtubers pushing buttons at a state-run TV station. Our “be kind to rapists” video was produced by the United States Department of Defense! And it makes the Finnish video look like a Charles Bronson film.

The Defense Equal Opportunity Management Institute (DEOMI), headquartered at Patrick Air Force Base in Florida, is the “social justice” educational arm of the U.S. Department of Defense. It was created in 1971 as the Defense Race Relations Institute. In 1979, under President Carter, the name was changed to DEOMI, and the mandate was expanded to combat “racism, sexism, and intolerance.” Tens of thousands of U.S. military personnel and civilians graduate from DEOMI’s courses. DEOMI serves all branches of the armed forces. The DEOMI commandant, a political appointee, answers to the Under Secretary of Defense for Personnel and Readiness.

In June 2012, Capt. Yolanda Y. Reagans became DEOMI’s first black female commandant. And in January 2013, DEOMI debuted an instructional video that has to be seen to be believed. Titled “Bystander Intervention Training,” the video introduced Americans to the nine points of “nonviolent action” that can stop a murderer or rapist cold in his tracks. Forget guns. Forget knives. Forget karate, pepper spray, or even Finnish handbags. These nine government-approved courses of action are all anyone needs (or should be allowed to use) in response to a rape or murder in progress.

The video opens with a startlingly brutal cartoon re-creation of the murder of Catherine “Kitty” Genovese, the 28-year-old woman whose rape and murder in a Queens neighborhood in 1964 sparked national soul-searching after it was reported that neighbors ignored her cries for help. Genovese was stabbed repeatedly in the back by a stranger named Winston Moseley, who then raped her as she lay dying. Moseley was a serial killer and necrophiliac whose “thing” was to stab a woman and rape her as she bled out. Ideally, he”d try to climax at the moment his victim passed.

I”ll admit, initially I was baffled that a government-led agency, one commanded by a black Obama appointee, would choose to dramatize the Genovese murder. Genovese was white, Moseley was black, and the “cartoon” doesn”t hide that fact. In retrospect, I think I understand why the Genovese case was chosen, but I”ll get to that later.

After dramatizing the Genovese murder, the video presents the nine nonviolent actions that one should take if confronted by a rapist/murderer/necrophiliac like Moseley. Here are the nine points, verbatim. No, this is not satire:

The video’s narrator, a young “woman of color” who initially appears in civilian clothing only to morph into full uniform at the video’s end (damn, I should have said “spoiler alert”), explains that although “assault or rape” is the first thing that comes to mind when “bystander intervention” is involved, these strategies can also be used to combat “harassment, hazing, or discrimination in its infancy.” As ludicrous as the Finnish video is, this one is a hundred bad miles of worse. “Humor”? “Body language”? “Dialogue”? “Easing strong feelings”? In the face of an attack by someone like Winston Moseley? At least the Finnish video allows the victim to touch the prospective rapist. The Department of Defense video prohibits any physical contact. Because of course any serial-killing necrophiliac rapist will respond well to “humor.” I”m surprised the video didn”t come with an accompanying book of jokes to help break the ice.