The GOP’s Rush to Suicide 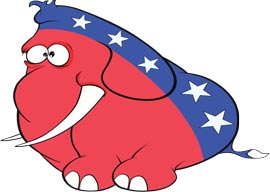 The 2016 presidential primary season has kicked off with a veritable Rainbow Coalition of prospective candidates. Rubio and Cruz are all-in for the GOP, with Fiorina and Carson likely additions to the field. Add Hillary Clinton to the mix as the Democrat to beat, and perceptive observers can anticipate (or dread) many coming months of hand-wringing among Republican elites and conservative pundits regarding how the party can expand its base and attract more women and racial/ethnic minorities.

Luckily for the GOP, Rush Limbaugh thinks he has the perfect solution for the “women and minority outreach” quandary…don”t reach out to them.

There. Problem solved. Thanks for reading! See you next week.

I must admit, however, that I have a few misgivings about Rush’s advice. For the benefit of readers who are unfamiliar with my past, I”m a fairly hardcore partisan. For five years I ran a group called the Republican Party Animals, through which (in the words of The Guardian) I “brought right-wing congressmen, celebrities, writers and entertainment industry figures together for shindigs, closed to outsiders, where they could scorn liberals and proclaim their true beliefs.” So I have a bit of a history with the GOP. But I never revered the elephant like a god; that nonsense is for Hindus and Hannity. I was always quick to point out an unwise strategy when I saw one. And I view Rush’s strategy as unwise at best, and potentially suicidal at worst.

“Limbaugh is trying to sell the GOP on a soothing lie.”

Limbaugh was addressing an overflowing crowd at a secret gathering of the Hollywood conservative group Friends of Abe at the Ronald Reagan Presidential Library and Museum in August 2013 when he went off on a small tangent about the “women and minorities” issue:

His message is simple: Don”t view potential voters as “special interests.” Just hold to your principles and if they show up, they show up.

Is there wisdom in the national GOP adopting a policy of not making an effort to attract women and minorities? From a PR perspective, yeah, sure. The professional diversity-pushers and “victim group advocates” in the press are all stick and no carrot. They never reward, only punish, and all heterodoxy must be rebuked, no matter how many virtual vaults of liberal Bitcoin a person has amassed. You can be Juan Williams, but an offhanded remark about Muslims at airports will get you banished.  You can be Jaime Escalante, but criticism of the teachers union will get an “enemy of the children” sign hung from your neck.  You can be Jackie friggin” Robinson, but an expression of support for a Republican will get you fired from your newspaper gig.

So yes, in that sense, it’s futile for Republicans to try to appease the race and gender-baiters. But the main problem with Limbaugh’s strategy is that it violates rule number one for electoral success: never lie to yourself. Lies are what you tell voters, and the better you can sell a lie, the more successful you”ll be. Look how well lying did for two very unlikely bedfellows “ Dick Cheney and Barack Obama. Cheney balls-out admitted lying about his opposition to gay marriage in 2000 in order to win the election. And Obama? Well, he’s still in office. Give him a few years, and he”ll be telling Vanity Fair how he had secretly always been pro-gay marriage; he just couldn”t say so in 2008.

In his speech, Limbaugh spins the idea of not pursuing female and minority voters into something that’s downright noble. Heroic, in fact. The lie he’s selling is that the GOP shouldn”t pursue women and minorities not because it’s futile, or because it’s difficult, but because “we don”t look at Americans as special interests.”