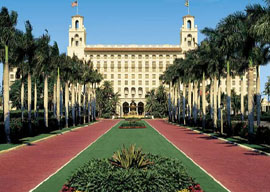 It seems all of the changes taking place these days are for the worse. I am hardly a Miss Havisham to say it would be better that some things”especially good hotels”remain unchanged.

The Breakers at Palm Beach is the best of these. Over the decades it has managed to make do with mere subtle alterations. The floors are covered with patterns meticulously matching previous ones. The furnishings change with time but are always in keeping with the same slightly tropical theme. This is likely because the hotel has remained under a single family’s purview for its entire history. Dynasties always deal more gracefully with time’s passage.

The Peabody of Memphis is another national treasure. Rooms are tasteful yet free of either awful “authentic” art or crass reproductions of classic works. The view from the rooftop terrace is spectacular during a Sunday brunch. The last time I was there they served seven different varieties of caviar.

“Anyone can make a new hotel; it takes generations to make history.”

A little north is The Seelbach in Louisville, a fine place as long as you aren”t there on Derby weekend. Otherwise it is a charmer. The lobby especially retains its essence and there is the smallest space of a mezzanine where you can arrange to meet with a young lady before going out. At night it affects a kind of echo up there so that if a genteel party is being held you can faintly make out the clink of glasses while imagining that Daisy or F. Scott will appear below you any minute.

The Drake in Chicago sadly fails the trend. They have “redesigned” in the past decade and taken out a great deal of its life. Prior to the redesign I stayed in a room facing Lake Michigan with extremely old-style light switches and ancient carpets that were nearly threadbare. I could almost feel the ghosts and convince myself of being in the very room where that murder they tried so hard to hush up in the 40s had occurred. These days I can only imagine myself at a very nice Howard Johnson’s.

New York’s Waldorf-Astoria York updates in the old style regularly and so tastefully you would mercifully never know the difference. It remains exactly as you would expect it to be, which is a very good thing.