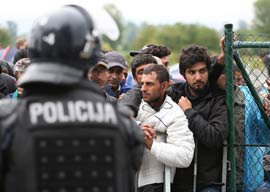 Of all the cruel psychological tricks that humans play on one another, gaslighting is among the worst. The term was popularized in the 1944 film Gaslight, wherein Charles Boyer attempts to convince Ingrid Bergman that she is insane and actually didn’t witness the tail end of her aunt’s murder/robbery.

In the nasty filthy unethical Port-a-Potty that is modern political discourse, gaslighting is de rigueur. The waterboys of the status quo gleefully attempt to gaslight anyone who mentions uncomfortable facts or asks forbidden questions by calling them a paranoid, hateful, bigoted loon.

I received an email last week that I suspect was a gentle attempt at gaslighting. My passive-aggressive antagonist, who claims to live in Denmark, said he enjoyed my articles as well as Gavin’s before proceeding to chide both of us for having crossed some sort of imaginary “fine line” in his head by implying that Muslim immigrants raping indigenous Europeans is, as the kids say, a “thing.” Mind you, neither Gavin nor I ever said that all Muslims do it. We only said that it happens with a frequency that may alarm anyone concerned about European cultural and demographic integrity. After all, raping another tribe’s women is usually an activity that winners of a war busy themselves with. He also implied that we were exhibiting “prejudice,” which literally means pre-judging something without reviewing the evidence.

OK, then, let’s look at the evidence. Verse 4:24 of the Koran”I refuse to capitulate and spell it “Quran””states:

And all married women (are forbidden) unto you save those (captives) whom your right hands possess.

Allah’s divine brain fart here instructs believers that it is inappropriate to have sex with married women unless they are infidels and you’ve taken them as your slaves by force.

“Both the Koran and Islam’s prophet were A-OK with raping nonbelievers.”

So both the Koran and Islam’s prophet were A-OK with raping nonbelievers.

In modern Denmark”whence allegedly originated this gently jibing email”anywhere from a third to half of all men convicted of rape are described as “foreigners,” which in Denmark disproportionately means Muslim asylum-seekers from the Middle East and Northern Africa. Since such foreigners comprise a mere ten percent of Denmark’s population, they are severely overrepresented when it comes to rapin’.

In Oslo, Norway, police figures from 2005-2010 found that in 86 cases of sexual assault where the victim could describe the perp, all but three of those men were described as having “non-Western appearance.” Stats from Oslo in 2001 claim that “two out of three rapes reported in Oslo last year were [committed by] men with a non-Western background.” There’s also the June 2011 suicide of 14-year-old Norwegian girl Eva Helgetun after three Somali migrants raped her.

On the last night of 2004, two Swedish girls named Jenny and Linda were headed to a New Year’s Eve party when four Somalis raped and nearly beat them to death. If you have the stomach for it, here’s the infamous photo of Linda’s bloody, smashed-in face after the attack. There’s also the 2011 case of a Swedish mother who was brutalized for seven hours by a dozen or so Afghan immigrants who cheered and clapped as they took turns violating her holes. The victim now lives in a wheelchair and wears diapers. One Swedish website estimates that in the 1990s, a full 57% of rape perpetrators were either foreign-born or unregistered as Swedish citizens. Other estimates peg the quotient as high as 77%. One twenty-one-year-old Arab migrant named Hamid explained, “It’s not as wrong raping a Swedish girl as raping an Arab girl….I don’t have too much respect for Swedish girls. I guess you can say they get fucked to pieces.”

Last month in Germany”the country doomed to receive the bulk of Middle Eastern “migrants” currently pouring into Europe”a seven-year-old German girl was raped in broad daylight in a public park “by a Muslim migrant from North Africa.” This website unspools a laundry list of Muslim-on-German rapes from 2015 alone.

This French paper details the rape of an eighteen-year-old French girl by three Turkish brothers and a Moroccan. And the late Sam Francis details the 1994 gang rape of a white girl in France by 11 young black male immigrants.

As grisly as all these accounts are, nothing tops England’s Rotherham grooming scandal in which “Asian” gangs”that’s what the British press calls Pakistani Muslims”systematically enslaved, raped, and pimped out an estimated 1,400 or more indigenous British children from 1997-2013. The abuse included “children who had been doused in petrol and threatened with being set alight, threatened with guns, made to witness brutally violent rapes and threatened they would be next if they told anyone.” Former home secretary Jack Straw said that some Pakistani men viewed white girls as “easy meat,” and he was of course accused of racism for his comment, because it’s impossible for there to be anything racist about raping white girls because you view them as easy meat.

The Rotherham scandal in particular was notable for the ferocity with which officials tried to silence and cover up all allegations for fear of being smeared as racists. The BBC even canceled a 2004 documentary about Muslim grooming gangs for fear that it would provoke racial tensions.