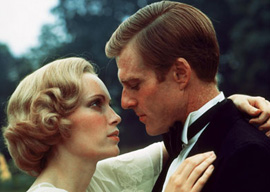 Mia Farrow and Robert Redford in The Great Gatsby, 1974

A recent Financial Times arts podcast predicts that we are headed for another outburst of Great Gatsby mania. A new movie version of F. Scott Fitzgerald’s 1925 classic will be released on Christmas Day starring Leonardo DiCaprio as Gatsby and Carey Mulligan as Daisy Buchanan. Here’s the trailer. It is a dreadful disconnect from the book. I sometimes wonder if moviemakers bother to read the books they make into pictures.

Disconnection has been the norm. Previous cinematic efforts have used The Great Gatsby as a point of departure. I’m referring to the curious 1949 production with Alan Ladd, the popular 1974 misinterpretation starring Robert Redford and Mia Farrow, and the 2000 version with Mira Sorvino and Toby Stephens. The latter may be the least objectionable.

The FT podcast is an intellectual gabfest. I highly recommend it. The four intense interlocutors regard Gatsby as a multifaceted metaphor for Fitzgerald’s time and our own.

Gatz, the eight-hour, word-for-word theatrical rendition of the novel, has just opened in London after being a hit in New York. In London, an adaptation at Wilton’s Music Hall is up and running. There is yet another musical version set for a London premiere in August. The short explanation: The copyright protection for Fitzgerald’s masterpiece has lapsed.

“I sometimes wonder if moviemakers bother to read the books they make into pictures.”

I also highly recommend the unexpurgated audiobook read by the late Alexander Scourby. He makes the Nick Carraway narration come to life. I have his readings of Hemingway’s short stories, and they are almost as good, especially the gut-wrenching “The Snows of Kilimanjaro.”

But the best experience is the book itself. Fitzgerald was a meticulous writer who took his work seriously. He revised right into the final galleys. The book’s central riddle is Gatsby: Who is he? Where does he come from? A major theme of the book is new versus old money.

Fitzgerald likens Daisy Buchanan to “the king’s daughter, the golden girl.” She could not marry Gatsby when they met and fell in love in Louisville, Kentucky. Gatsby, an army officer headed off to war, had no prospects and no fortune then. Daisy breaks it off while he is fighting on the Western Front in France. On the rebound, she marries Tom Buchanan, a strapping young Yale football star from a wealthy Chicago family. The day before the wedding, Tom gives Daisy a string of pearls “valued at three hundred and fifty thousand dollars.”

Four or five years later, Tom has “come East in a fashion that rather took your breath away…he’d brought down a string of polo ponies from Lake Forest.” Narrator Nick Carraway comments, “It was hard to realize that a man in my own generation was wealthy enough to do that.” Nick is starting out in the bond business and commutes from Long Island’s north shore to lower Manhattan. Tom and Daisy have rented an enormous waterfront mansion with stables and vast grounds. Nick is renting a bungalow in a nearby village. The bungalow is next to a HÃ´tel de Ville-styled mansion with forty acres of lawns and gardens. This is where Gatsby lives.