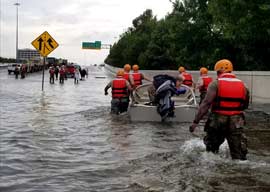 Our grieving nation breathed a sigh of relief when the Associated Press broke the news that Hurricane Harvey was not a racist.

“Black, white, rich, poor: Storm Harvey didn’t discriminate,” read the headline, because the important thing to remember is that even though people were drowning by the dozens and disease was spreading rapidly and tens of thousands were losing everything they’ve ever owned, at least we could all clasp hands and celebrate the fact that Harvey—who may or may not be a white male—had no problem with indiscriminately killing human beings of all colors and ethnic backgrounds.

In case you didn’t know, the perpetually humid and now vastly underwater urban colossus of Houston, TX, leapfrogged over New York in 2010 to become the nation’s “most racially and ethnically diverse major metropolis.” In 1970, nearly two-thirds of Houston was white. Now it’s hovering at about one-quarter and forever plummeting. Hispanics are inching toward an outright majority, and the rest of the city is peppered with blacks and Vietnamese and Asians and possibly even the occasional Martian and chimpanzee enclaves.

For sociology professor Stephen Klineberg of Rice University, this is cause for celebration:

This biracial Southern city dominated by white men throughout all of its history has become, by many measures, the single most ethnically diverse major metropolitan area in the country. Who knew Houston would turn out to be at the forefront of what’s happening across all of America?

Who knew? Apparently not the legions of leftist fanatics who openly salivated at the idea that thousands of white redneck bigots would be drowning in Texas last week. So eager were they to revel in the idea of a PMS-enraged Goddess punishing these inbred racists with a hurricane and flooding, they didn’t check to see that the area getting walloped went solidly blue in the 2016 elections. The blood-red parts of Texas—where all those foul-spirited subhuman Republican white rednecks live, the ones who put Trump over the top and gave him the nation’s second-largest electoral prize, those morally retarded mutant throwbacks who live and breathe on pure fumes of hatred—were mostly untouched by Harvey’s destruction.

“Our grieving nation breathed a sigh of relief when the Associated Press broke the news that Hurricane Harvey was not a racist.”

Can you imagine these progressive sadists’ bitter moral agony when informed that there would be no rainbows in Houston until the storms had taken a rainbow coalition of human lives? Can you picture the tears that fell sadly to the ground when they realized that not only white people would be dying?

But such trifling demographic realities didn’t stop the anti-white Hate Storm on Twitter, where to my knowledge no one has ever been banned for saying white people should be killed:

Where did that Hurricane hit? Mostly white folks, yeah? Loads of white people??…Good.

If you live in texas, i hope you die. just know that. dont care who. this is the cleanse white people wanted. it starts with them.

Fuck all the trump supporting ass white people in Texas save all the animals from the hurricane.

By the by, what’s with the term “racist ass white people”? Am I to infer that only their asses are racist? What about the rest of their bodies? Black American slang is a thing of endless mystery and wonderment.

Houston Mayor Sylvester Turner—a man not quite as black as a roasted coffee bean but is getting there—graciously assured the city’s estimated 600,000 illegal immigrants that he would block any efforts to deport them should they check into city shelters seeking solace from the storm.

Modern leftists have developed a unique ability to ignore the actual suffering of their pet protected classes if it gives them a chance to rejoice at the imagined suffering of those fascist Nazi pale-faced crackers they hate with every flabby cell of their smelly bodies.

The editorial staff of French satirical paper Charlie Hebdo—at least the ones who survived the 2015 massacre in their office at the hands of Islamists angered by their irreverent depiction of Muhammad—ran a cover featuring half-submerged Nazi flags and Sieg-Heiling hands along with the headline “God Exists! He drowned all the neo-Nazis in Texas!”

American cartoonists likewise felt the insatiable itch to politicize the meteorological tragedy. Syndicated cartoonist Matt Wuerker felt the need to depict a fat white Texas secessionist in a cowboy hat and a Rebel flag T-shirt thanking God’s angels for rescuing him from the flood, only to be scolded by a member of the Coast Guard that it was actually the big, beautiful, bosomy, beneficent federal government that was helping him.

Bob Rogers of the Pittsburgh Post-Gazette showed Donald Trump rescuing recently pardoned Arizona Sheriff Joe Arpaio from floodwaters. Nate Beeler of the Columbus Dispatch seized the disaster as an opportunity to once again accuse Trump of the sin of transphobia.