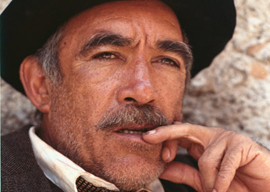 Many people claim that they pay no attention to race, but then along comes the Jeremy Lin story to prove again that most folks do. Wikipedia, that embodiment of 21st-century attitudes, remains diligent about posting most of its subjects” racial and ethnic background. I enjoy using their countless racial lists, such as Oscar nominees, to count subversively.

The funniest footnote in Charles Murray’s book Coming Apart is where he documents his assertion that the movie industry openly proclaims its liberalism with:

Yet Hollywood applies its own diversity rules selectively. For instance, blacks matter. Every few years, the Oscar season is wracked with controversies over whether blacks (or less often, women) are getting their fair share of statuettes. A year ago, there was a fuss over how not a single black had been nominated.

“Wikipedia’s Oscar lists suggest that no Mexican American has been nominated in any category, no matter how humble, since the 1980s.”

Blacks have been nominated 60 times for Oscars in the four acting categories, so the quibbles have grown more meta. This year, Viola Davis and Octavia Spencer are in the running for The Help, but that raises second-order controversies about whether we should be comfortable with black actresses playing maids.

And why have black leading ladies been nominated only half as often as black leading men? Is Hollywood saying black women are less attractive?

Black achievement in less glamorous Oscar categories has been more modest, but that doesn”t raise much interest. For example, after blacks garnered seven Best Score nominations from 1961-1987, none has been nominated in almost a quarter-century. (That might imply that black musical competence has been declining in the hip-hop age, but nobody wants to talk about that.)

Yet the most striking diversity shortfall in Hollywood is one that would get any less liberal industry in trouble with Obama’s Equal Employment Opportunity Commission. Los Angeles County is about half Hispanic, and Latino fans make up 30% of the enthusiasts for summer blockbusters. Despite all that, Mexican Americans”meaning those who have spent at least part of their formative years in America”are remarkably underrepresented in The Industry.

Wikipedia’s Oscar lists suggest that no Mexican American has been nominated in any category, no matter how humble, since the 1980s.

Oddly enough, Mexican Americans did better in the pre-diversity days, receiving five acting nominations from 1952 through 1964. Granted, one went to Susan Kohner, daughter of a Mexican silent-film actress who married her Jewish producer.